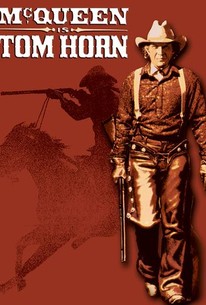 Based on a true story, Steve McQueen (the film's executive producer) stars as bounty hunter Tom Horn in Wyoming who winds down his long career of heroism as civilization moves westward at the turn of the 19th century. As he loses touch with reality, he indulges in a string of killings. Soon after witnessing his ultra-violent behavior, his cattle baron employers decide to frame him for the murder of an adolescent boy.

The movie has no poetry and no vitality.

The movie seems to keep violence at a distance and at the same time, it involves viewers in brilliant and energetic scenes. [Full Review in Spanish]

Beautiful to look at but the story never develops into the elegant and hard-hitting film it could have been.

In its moments of beauty, Tom Horn becomes an entirely different Western...

Steve McQueen doesn't give a great performance in his next-to-last motion picture, about the last days of a real-life Wyoming bounty hunter, nor does director William Wiard craft a memorable Western. The movie has its moments here and there but results to be a little bit tiring and slow-moving. It's a melancholy chronicle and near bittersweet dealing with the last exploits of Horn who is shown as hired hand to eliminate some rustlers. Good support cast who provides the best moments as Richard Farnsworth, Slim Pickens and Billy Green Bush, and a beautiful Linda Evans. At the end of the movie is a 1904 quote from Coble, saying that that Tom was not guilty of the crime of which he was accused and convicted. That's what I thought he was.

McQueen made better movies but this one isn't bad.

A well shot and acted low key western.With the likable mcqueen at centre stage.Really don't make these type now days and if mcqueen were around today would of loved to seen him team up with Eastwood and Costner in a westen that would have been cool.