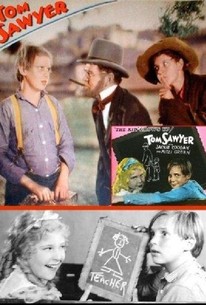 Tom Sawyer, Paramount's 1930 Christmas release, was the first talkie version of Mark Twain's beloved novel. A rapidly maturing Jackie Coogan is well cast as Tom, while Junior Durkin is even better as Tom's freewheeling pal Huck Finn. Juvenile impressionist Mitzi Green comes on a bit too strong in the normally demure role of Becky Thatcher, but that's what her fans expected. On the other hand, Jackie Searl and Clara "Auntie Em" Blandick are perfectly typecast as, respectively, Sid Sawyer and Aunt Polly. The usual episodes are dramatized herein, including the white-washing scene, the premature funeral, the murder in the graveyard, and the chase through the caves, culminating with the death of villain Injun Joe (played by Charlie Stevens, in real life a great-grandson of Geronimo. Though the 1930 Tom Sawyer pales in comparison to the slick Selznick Technicolor remake of 1938, it proved popular enough to warrant a sequel with virtually same cast, Huckleberry Finn, released the following Christmas. ~ Hal Erickson, Rovi

There are no critic reviews yet for Tom Sawyer. Keep checking Rotten Tomatoes for updates!

There are no featured reviews for Tom Sawyer at this time.