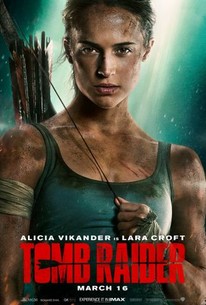 Critics Consensus: Tomb Raider reboots the franchise with a more grounded approach and a star who's clearly more than up to the task -- neither of which are well served by an uninspired origin story.

Critics Consensus: Tomb Raider reboots the franchise with a more grounded approach and a star who's clearly more than up to the task -- neither of which are well served by an uninspired origin story.

Critic Consensus: Tomb Raider reboots the franchise with a more grounded approach and a star who's clearly more than up to the task -- neither of which are well served by an uninspired origin story.

Lara Croft is the fiercely independent daughter of an eccentric adventurer who vanished when she was scarcely a teen. Now a young woman of 21 without any real focus or purpose, Lara navigates the chaotic streets of trendy East London as a bike courier, barely making the rent, and takes college courses, rarely making it to class. Determined to forge her own path, she refuses to take the reins of her father's global empire just as staunchly as she rejects the idea that he's truly gone. Advised to face the facts and move forward after seven years without him, even Lara can't understand what drives her to finally solve the puzzle of his mysterious death. Going explicitly against his final wishes, she leaves everything she knows behind in search of her dad's last-known destination: a fabled tomb on a mythical island that might be somewhere off the coast of Japan. But her mission will not be an easy one; just reaching the island will be extremely treacherous. Suddenly, the stakes couldn't be higher for Lara, who--against the odds and armed with only her sharp mind, blind faith and inherently stubborn spirit--must learn to push herself beyond her limits as she journeys into the unknown. If she survives this perilous adventure, it could be the making of her, earning her the name tomb raider.

Michael Obiora
as Baxter
View All

Roar Uthaug (The Wave) directed; his work feels derivative of Steven Spielberg's first two Indiana Jones movies, though not half as entertaining.

But there's little [Roar Uthaug] can do with Robertson-Dworet and Alastair Siddons's script (derived largely from the "third era" of the video game), which functions like a treasure map without resonance or mystery.

It all feels half-arsed - you'll be so bored at times you'll find yourself wondering if the rock placement in a jungle scene looks too fake (it does, by the way).

Tomb Raider unapologetically wears its Thirties-era B-movie antecedents on its sleeve while maintaining a very 21st century attitude toward its whip-smart and realistically tough (yet vulnerable) protagonist.

Though I can't necessarily see myself watching Tomb Raider again, I can't deny that I enjoyed it, or that I'd shell out to see a second (or third) installment of the series.

Along with some tight action scenes and a commitment to its tone, Tomb Raider works well enough to recommend.

An action-packed origin story of Lara Croft, Tomb Raider focuses less on objectifying our heroine and more on a realistic, entertaining adventure.

With a good story, good direction, and a great lead actress, it doesn't really matter where your movie was adapted from.

The story and action are fairly generic but Vikander carries the day, reshaping a character we already thought we knew.

It boasts thrilling action sequences that not only nod to the video game origins, but also stand on their own as expertly choreographed stunts.

Mike Massie
Gone With The Twins
View All Critic Reviews (322)

You just can't win with game adaptations. This one is so close to the two latest games that you sometimes wonder if you played exactly that action sequence before. Alicia Vikander is also a pretty perfect cast, both likable and tough. Unfortunately the showdown in the proverbial tomb falls a bit short, both in design and delivery. This is still a fine adventure film that would deserve to be continued.

How to deliver a film based on a video game known for its lust appeal, physicality, and some few puzzles to figure out? Well, this is more than simply a decent attempt, that's yards better than the previous one. Vikander provides the charisma aplenty and the action fully engages the physicality of the video games. Interestingly, the "little girl looking for her long lost Dad" angle was possibly the weakest element here. Felt like the second one would be better somehow.