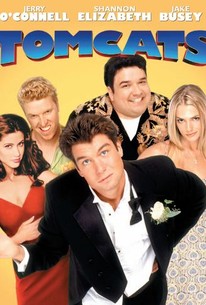 Critics Consensus: Why even bother? You already know if you're going to see it or not.

Critics Consensus: Why even bother? You already know if you're going to see it or not.

Critic Consensus: Why even bother? You already know if you're going to see it or not.

This romantic comedy in the vein of There's Something About Mary and American Pie concerns the story of Michael Delaney (Jerry O'Connell), a struggling cartoonist who makes a bet with seven buddies over who will be the last to marry. Several years later, the pot has boiled down to two: Michael, who is battling gambling debts in Las Vegas, and diehard bachelor Kyle Bremmer (Jake Busey), who is a self-proclaimed ladies' man. Michael tries to get Kyle to wed within 30 days in order to rescue himself from financial turmoil. When Natalie (Shannon Elizabeth) enters the picture as Kyle's new intended bride (as set up by Michael), she and Michael end up falling for one another, setting up a competition for her affections by the two men. Tomcats is the feature directorial debut for screenwriter Gregory Poirier.

Sole Alberti
as Consuela
View All

Grown men with their own offices found this material amusing enough to film.

It is a comic nadir, the stanky green crust caking the bottom of the well of titters.

Laced with such rampant misogyny that the laughs stick in your throat.

In its mingling of horniness and disgust, Tomcats attains a convoluted cleverness.

This is 90 minutes of gags of the lowest order.

It brings the gross-out comedy genre to a new low.

A parade of labored sex gags and bathroom humor.

Desperate is too kind a word. This isn't so much a movie as director Gregory Poirier's failed application to the Farrelly Brothers Country Club. Even those looking for T&A will be disappointed, unless Jerry O'Connell's hairy tuchus floats their boat.

So what happens when everyone making a skin flick gets Puritanical about showing skin? A plot, that's what, and 'Tomcats' offers a yarn that's truly yawn-provoking.

A pretty good cast line up for the time, most had been in a big hit around 2000. Similar to There's Something about Mary as 2 guys who vowed to stay single end up chasing the same girl. It has quite a bit of gross out gags, maybe a bit too much on the gross side! It has it's moments but they can be few and far between.

This is the motherload of all that is "Late Night" Comedies..and it almost pulled it off perfectly, but almost is only good in your dreams!

"Call me Mistress, you disgusting worm" If you like hilarious perverted humor, you'll love this one haha. And Michael Delaney was just yummy.

Its crass laughs but rarely do they work. Its tame compared to the likes of American Pie, and its never as offensive as it makes itself out.