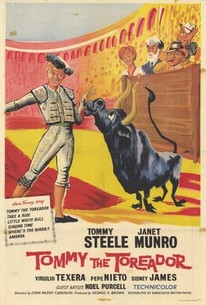 In this lightweight 1960 musical comedy, rock singer Tommy Steele plays Tommy Tomkins, a British sailor. Steele was popular in England during the time this film was released, and the movie is mainly a showcase for its star's musical talents, with songs including the title tune and others such as Little White Bull. After a few misadventures, Tomkins and his girlfriend Amanda (Janet Munro) find themselves in Spain. There, they meet up with a renowned bullfighter. When the bullfighter is set up by a bunch of smugglers to take the rap for their crimes, Tomkins must step in and replace the bullfighter for one long, awful day. He hopes to win his fortune as the stand-in matador, free the real bullfighter, and get back to England. But the bulls have other ideas.

Critic Reviews for Tommy the Toreador

There are no critic reviews yet for Tommy the Toreador. Keep checking Rotten Tomatoes for updates!

There are no featured reviews for Tommy the Toreador at this time.