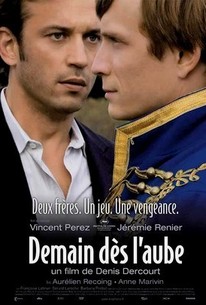 A man dealing with a variety of crises learns his brother may have even more troubles than he does in this drama from director Denis Dercourt. Mathieu Guibert (Vincent Perez) is a musician who has sunk into a swamp of anxiety and depression, aggravated by a difficult relationship with his booking agent and former wife Jeanne (Anne Marivin) and the news that his mother (Francoise Lebrun) has been diagnosed with cancer. When Mathieu's mother warns him that his brother Paul (Jeremie Renier) has developed some strange hobbies, Mathieu looks in on him and learns Paul has joined a group that reenacts military campaigns from the era of Napoleon. Mathieu regards Paul's new pastime as eccentric but not dangerous until he meets a self-proclaimed Captain (Aurelien Recoing) who challenges Mathieu to a duel -- using real weapons. Demain des l'aube (aka Tomorrow At Dawn) was an official selection at the 2009 Cannes Film Festival, where it was screened as part of the "Un Certain Regard" program.

Barbara Probst
as Christelle
View All

Critic Reviews for Tomorrow at Dawn

There are no critic reviews yet for Tomorrow at Dawn. Keep checking Rotten Tomatoes for updates!

Audience Reviews for Tomorrow at Dawn

There are no featured audience reviews yet. Click the link below to see what others say about Tomorrow at Dawn!