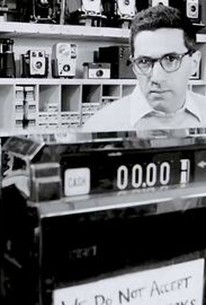 Comedian and TV writer Louis C.K. wrote, produced, and directed this comedy about New York photo shop owner Charles (Chuck Sklar), labeled a "mean bastard" by his mailman (J.B. Smoove). After a date with nympho Lola Vagina (Heather Morgan) goes nowhere, Charles meets elderly Florence (Martha Greenhouse). Married to a gambler (Joe Dolphin), Flo hasn't heard from her son (Greg Hahn) for two decades. After her husband is killed by a pack of wild dogs, Charles and Flo marry -- but then her son returns and she also decides to adopt a gun-wielding teen named Clean (Bruce Brown). It's all too much for Charles, who decides to head back to his photo shop. Gagwriter Louis C.K. has scripted for David Letterman, Conan O'Brien (seen here in a cameo), Dana Carvey, and Chris Rock. Filmed in black-and-white with Super-16 blown up to 35mm. Shown at the 1998 Sundance Film Festival. ~ Bhob Stewart, Rovi

JB Smoove
as Mel The Mailman

Heather Morgan
as Lola
View All

It's more weird and off-balance than genuinely funny; I laughed out loud more at his email selling the film than the film itself.

It is strangely intoxicating.

The movie has diarrhea jokes, a randy granny, and a weirdo who sits in a big bowl of ice cream while pleasuring himself. Laughing yet?

If Tomorrow Night creates such double vision and disturbance, it's just another proof that the discontinuity and strangeness that marks Louis CK's comic, casual art is-like the best art-not just virtuosic, but gruesomely (and brilliantly) true.

For the entertaining gems in Tomorrow Night, the faint of heart must be willing to suffer through some bleak black and white weirdness.

[Louis] C.K. has always seemed to be the type who learns by doing, and Tomorrow Night marks an important step in his creative evolution, even though it's more notable for its only intermittently realized potential than for its level of achievement.

There are no featured audience reviews yet. Click the link below to see what others say about Tomorrow Night!