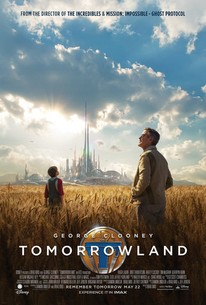 From Disney comes two-time Oscar (R) winner Brad Bird's riveting, mystery adventure "Tomorrowland," starring Academy Award (R) winner George Clooney. Bound by a shared destiny, former boy-genius Frank (Clooney), jaded by disillusionment, and Casey (Britt Robertson), a bright, optimistic teen bursting with scientific curiosity, embark on a danger-filled mission to unearth the secrets of an enigmatic place somewhere in time and space known only as "Tomorrowland." What they must do there changes the world-and them-forever. Featuring a screenplay by "Lost" writer and co-creator Damon Lindelof and Brad Bird, from a story by Lindelof & Bird & Jeff Jensen, "Tomorrowland" promises to take audiences on a thrill ride of nonstop adventures through new dimensions that have only been dreamed of.(C) Walt Disney

The much-hyped film itself feels overwhelmingly bland... I hope there are some young girls out there will take heart in seeing a heroic, science-loving teen girl onscreen. For everyone else, can I recommend staying home and reading Ursula Le Guin instead?

A futuristic Disney fantasy in a choppy and tiresome narrative.

The point of Tomorrowland is to encourage youngsters to think out of the box, stay positive and never give up. It's a sweet and inspirational message buried in a mire of cryptic plotting.

The aesthetics are easy to ape, but one should never underestimate the value Spielberg places on tight, clear, logical storytelling.

There's so much great stuff in this movie that doesn't even remotely hang together.

The ultimately simple charms of the film are more impressive and memorable than its more state-of-the-art trappings.

Tomorrowland falls flat in promising what it's advertising, feeling more like concept art before a final film. Overflowing with optimism, it fails to feel genuine.

The plot continues to scurry down the proverbial rabbit hole with greater and greater sci-fi strangeness - without an end in sight.

Raffey Cassidy is also quite the small wonder here.

The aim of Tomorrowland is admirable, we can all use a more optimistic outlook, but the execution comes across like an unfocused, ham-handed, self-congratulatory editorial.

Brad Bird coordinates another visionary piece of Disney's acclaimed attractions. Tomorrowland is able to grasp the innovations and allure that the Disney World ride originally entails. Even if the film's social commentary and odd gaps are a bit overwhelming, the film has enough heart and charm to keep you believing. 4/5

It is pretty heavy-handed at times - I guess it thinks that subtlety is overrated when it comes to a younger audience -, but it compensates for its flaws with a welcome message (if oversimplified to the point of silliness) about the importance of, well, saving the world.

Akin to spending 2 plus hours trapped inside a video game. Some cool special effects but absolutely nothing else. Blech.