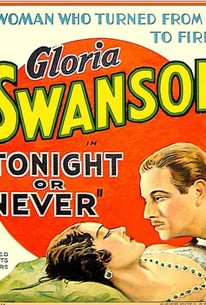 Though frequently credited to impresario David Belasco, the play upon which Tonight or Never is based was actually penned by Lili Havatny. Gloria Swanson stalks through the proceedings as an opera prima donna who goes through men like tissue paper. While on holiday in Venice with her elderly fiance Ferdinand Gottschalk, Swanson becomes intrigued by one of her admirers, Melvyn Douglas (in his film debut). One evening Douglas manages to corner the heroine in her lavish apartment, whereupon she becomes convinced that he's merely a gigolo interested in her money. But -- ha-ha -- the last laugh is on Swanson when Douglas reveals that he's a representative of the Metropolitan Opera, determined to sign her to a contract. Produced by Sam Goldwyn, Tonight or Never represented the end of the first phase of Gloria Swanson's talkie career; she subsequently announced her "retirement" but was back before the cameras two years later.

Robert Greig
as The Butler

Greta Meyer
as The Maid

Boris Karloff
as The Waiter
View All

Critic Reviews for Tonight or Never

There are no critic reviews yet for Tonight or Never. Keep checking Rotten Tomatoes for updates!

Audience Reviews for Tonight or Never

This movie has its funny moments, and its dull moments, but in the end it's a formulaic romantic comedy. It's pretty good but it could have been better.