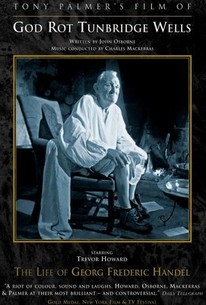 This bold, brash biopic of George Frideric Handel, which originally aired on Britain's Channel Four in 1985, was produced to commemorate the 300th anniversary of Handel's birth. As scripted by John Osborne and directed by the iconoclastic Tony Palmer, it aggressively attempts to cut through the refined aura that time had attached to Handel, exemplified by sub-par performances of The Messiah. Osborne and Palmer paint an image of Handel (here played by the great Trevor Howard) as a musical revolutionary, who turned London upside down, permanently obliterated the stoicism of the Georgian Era, and set a precedent for centuries of assertive, aggressive, take-no-prisoners British music. The title comes from an exchange Handel purportedly had with the Turnbridge Wells Ladies' Music Society. That ensemble performed an appalling version of The Messiah that Handel could not stomach, prompting him to supposedly fire off the said phrase in a letter to them -- thereby shocking everyone. ~ Nathan Southern, Rovi

There are no critic reviews yet for Tony Palmer's Film of God Rot Tunbridge Wells. Keep checking Rotten Tomatoes for updates!

There are no featured reviews for Tony Palmer's Film of God Rot Tunbridge Wells at this time.