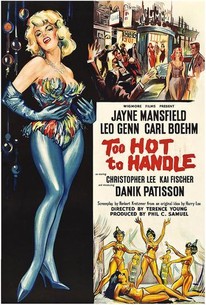 Too Hot to Handle Photos

In this British crime drama, a French reporter is doing a rather steamy story about the secret strip joints found in London's Soho district. He meets the owner of the famous Pink Flamingo and the club's star. The girl gets into trouble after she involves herself with too many men.

Ken Martyne
as Dancer
View All

Critic Reviews for Too Hot to Handle

Everything about it is as squalid as its subject, but the real nastiness is in its hypocrisy, the suddenly high moral tone it takes at moments.

Audience Reviews for Too Hot to Handle

Low budget but decent crime drama. Jayne, approaching the end of her brief heyday, is pretty good as the sort of den mother to a group of strippers, she even performs a few mediocre numbers. This really shows how the vision of the desirable female form has changed over the years. Nowadays the lithe hard body look if the goal but Jayne is anything but that, very curvy and quite plump she is harshly lit as is the film but even with that at times she looks stunning. The plot takes a while to get going and really isn't focused sharply enough to make the film as involving as it should be but Leo Genn is good in the lead and he and Jayne hold your interest whenever they are on screen.

Too Hot to Handle Quotes