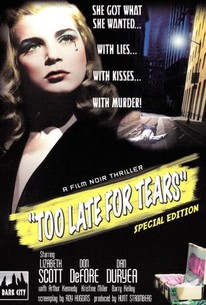 Too Late for Tears Photos

When Lizabeth Scott's Jane Greer husband Arthur Kennedy accidentally gets his mitts on $60,000 in stolen money, she insists that he keep the dough rather than turn it over to the authorities. Two-bit private eye Dan Duryea catches on to Scott's subterfuge, and demands that she turn the cash over to him. Scott persuades Duryea to split the money with her--then, determining that Kennedy might be too honest for everyone's own good, she murders her husband. To cover her tracks, Scott reports her husband as missing. This brings in yet another fly in the ointment: Don DeFore, the brother of Scott's first husband, who died under mysterious circumstances. The already knotted webs of intrigue become even more tangled before Scott's ironic comeuppance. Too Late for Tears was scripted by Roy Huggins, who later produced such TV detective series as The Rockford Files.

Garry Owen
as Officer at Switchboard

Perry Ivins
as Attendant at Stand

Critic Reviews for Too Late for Tears

Despite an involved plot and an occasional overabundance of palaver, not all of which is bright, this yarn about a cash-hungry dame who doesn't let men or conscience stand in her way, is an adult and generally suspenseful adventure.

The movie failed to find much of an audience in its own time. It looks a little better every year.

[Lizabeth Scott's] performance as the ruthless Jane Palmer remains one of the genre's meatiest and devious since the film revolves exclusively around her actions and not those of her male co-stars.

As the money-hungry woman without a conscience, Scott is terrific, seductive as Ulysses' sirens and just as destructive to the men she draws into her web.

The husky-voiced winsome smiling Lizabeth Scott turns in a finely tuned performance as the femme fatale.

Audience Reviews for Too Late for Tears

Lisabeth Scott as a lady whose first rule is "money is king" and whose second rule is "didn't you read the first rule?". Once you begin to understand that you feel sorry for anyone she meets because you know something life-changing that they don't. This noir has lots of caged tension going for it, and the Duryea/Scott changing dynamic/character arc is reason for paying the admission alone. Mmm ... good noir.

Solid noir with one of the more despicable femme fatales in the genre's history. Fortunately that succubus is played by Lizabeth Scott, one of the best purveyors of silky villainy the genre ever had.

wow what a performance by lizabeth scott! well she's a little less wooden than usual anyway. mild mannered housewife morphs into psychotic killer when a suitcase full of cash lands in her car. it's a shame this film isn't better known. it's public domain and not in the best condition. there were some really abrupt cuts in the version i saw. i hope this gets a restoration one day. lizabeth deserves it!

If you value your life, don't come between Lizabeth Scott and her money!

Too Late for Tears Quotes