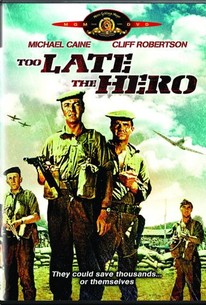 Cliff Robertson stars as an opportunistic, mildly cowardly US navy lieutenant who is reluctantly recruited for a suicide mission. When his CO is killed, Robertson is forced into a leadership position, ordering his men forward to destroy a Japanese outpost. Michael Caine, Harry Andrews and Denholm Elliott play key roles, while Henry Fonda makes a pre-credits guest appearance as the man who gives Robertson his marching orders. Suicide Run caused a serious rift in the relationship between star Cliff Robertson and director Robert Aldrich, when the latter would not give the former time off from shooting so he could go to the Academy Awards ceremonies to pick up his Oscar for Charly.

Frank Webb
as Ensign
View All

Critic Reviews for Too Late the Hero

The most aggravating thing about Too Late the Hero is that Aldrich is a film maker of some accomplishment.

An okay World War II melodrama, featuring Michael Caine and Cliff Robertson as antagonists who come to respect each other in the course of destroying a Jaanese radio transmitter.

The action has its moments (with the patrol's paranoia fed by taunting messages from Japanese loudspeakers hidden in the jungle), and the bantering dialogue is often very funny.

Although committed to the notion that war is an inclusive system of betrayals, the film subverts that notion and settles instead for some fashionable ironies and remarkably conventional jungle warfare displays.

One can't help but feel we've been slogging through this movie jungle since childhood.

One might have thought that one Dirty Dozen was enough for a filmmaking career.

Finds veteran action director Aldrich resting on his laurels, delivering a rather bland retread of past success.

Too Late the Hero is updated to the extent that it tosses in some war-is-hell comments as well a few thoughts about the demoralizing effect it has on men. It's still old fashioned stuff none the less.

Just another war movie, really, with only the lengthy roster of star names and claustrophobic island location to set it apart from its peers.

Audience Reviews for Too Late the Hero

There are no featured audience reviews yet. Click the link below to see what others say about Too Late the Hero!

Too Late the Hero Quotes