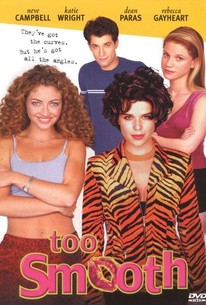 Would-be actor Danny Reilly (Dean Paras), living in Hollywood, can't help but lie to women to get them into bed. But he's finally met his match in lovely Corey (Katie Wright), yet can't turn off his urge to fudge the truth, even when the woman of his dreams demands complete honesty. Not helping matters is Renee (Neve Campbell), a former girlfriend, now a movie star, who is obsessed with ruining Danny's life by poisoning new relationships. And then there's Tim (Stefan Brogren), Danny's roommate, who isn't gay after all but who also has the hots for Corey. And then Danny meets -- and is caught with -- fast-acting Jennifer (Rebecca Gayheart), even though it's not what it looks like. Or is it?

Critic Reviews for Too Smooth

...comes off as a glorified sitcom...

There are no featured reviews for Too Smooth at this time.