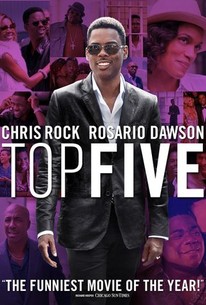 Critics Consensus: As smart, funny, and trenchant as writer-director-star Chris Rock's best standup work, Top Five is a career highlight for its creator -- and one of the comedy standouts of 2014.

Critics Consensus: As smart, funny, and trenchant as writer-director-star Chris Rock's best standup work, Top Five is a career highlight for its creator -- and one of the comedy standouts of 2014.

Critic Consensus: As smart, funny, and trenchant as writer-director-star Chris Rock's best standup work, Top Five is a career highlight for its creator -- and one of the comedy standouts of 2014.

Pulsing with the rhythm of his greatest stand-up, Chris Rock's TOP FIVE takes things to the next level, reveling in the high and the low, and blending a star-studded comedic romp with an irresistible romance. TOP FIVE digs under the surface of show business, politics, rap, and the exigencies of being black and famous today-holding it all up to the light in the way only Chris Rock can. Mingling echoes of Woody Allen and Dick Gregory with the energy of Kanye West and Jay Z, TOP FIVE is an original and radically new kind of American movie. Written, directed by, and starring Chris Rock, TOP FIVE tells the story of New York City comedian-turned-film star Andre Allen, whose unexpected encounter with a journalist (Rosario Dawson) forces him to confront the comedy career-and the past-that he's left behind. Starring Chris Rock, Rosario Dawson, Kevin Hart, Tracy Morgan, Cedric The Entertainer, J.B. Smoove, Sherri Shepherd, Anders Holm, Romany Malco, Leslie Jones, Michael Che, and Jay Pharoah. The film is produced by Scott Rudin and Eli Bush. The Co-Producers are Shawn "Jay Z" Carter and Kanye West; the Executive Music Producer is Questlove. (C) Paramount

Adam Sandler
as Himself

Jerry Seinfeld
as Himself

Cedric the Entertainer
as Jazzy Dee

Dean Edwards
as Comic on Stage

Teddy Coluca
as Maurice the Tailor

Gabourey Sidibe
as Herself

Jim Norton
as Himself
View All

Overall, I appreciate what this film does in showcasing a more serious Chris Rock. I think it's his best film to date.

Top Five gives us a glimpse of [Rock's] comic genius. Just a tad.

He finds a cinematic approximation of his act: free-flowing, unpredictable, personal, spiced up with pop cultural references, political shout-outs, and a decidedly hip-hop energy, and above all else, funny as hell.

Top Five is hardly in the same class as Stardust Memories but it is still manifestly cinema, rather than filmed comedy, and the gags are often visually sophisticated.

Beneath the meta-fiction and the lulz lies a genuinely warm romance in the style of Richard Linklater's Before Sunrise.

An absolute embarrassment of riches.

Rock and Dawson spark in long, uncut scenes of dialogue that echo Before Midnight. Flirting and sparring throughout the film, they are at the heart of the story but Rock has populated the movie with other interesting characters and cameos.

On one hand, it's an insightful examination of fame and artistic freedom. On the other, it's a sexual comedy of the most obscene nature.

Top Five...finally gives Rock the filmic vehicle he has needed since he tried to transition to the screen.

Big laughs and believable vulnerability. But it also has aged faster than Indiana Jones Nazis unable to spot the cup of a carpenter and relies on truly retrograde eye-rolling plot turns about reporters' motives.

Featuring the funniest sex scene since Team America, and a film-stealing cameo from an unexpected rapper, Top Five is such an enjoyable watch that it's easy to ignore how slick and clever it often is.

Rumored to be a Woody Allen-esque Chris Rock movie, "Top Five" IS a pretty walky-talky journey between a B-list comedian with A-list aspirations and the journalist interviewing him, but I'm not really sure about the relevance of the inciting task of ranking one's top five favorite rap artists. The scope of the interview is more expansive than that. Chris Rock and Rosario Dawson eventually create some tragically beautiful missed-connection chemistry, but the movie is too slow throughout and too afraid to let the intimate conversation carry itself.

This is a very unique and intriguing movie. Chris Rock's social awareness while writing this part-satirical/part-meta screenplay really pays off as it explores the life of reality stars/celebrities and their on and off screen personas. There are some hilarious moments, but "interesting" or "charming" are better ways to describe this movie. The cameos are also very nice. This film is Rock solid work.

Made me laugh and think. Launk? Thingh? Anyway - see it, you won't be sorry.

Beat my expectations by a long shot...