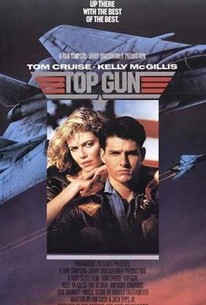 Critics Consensus: Though it features some of the most memorable and electrifying aereial footage shot with an expert eye for action, Top Gun offers too little for non-adolescent viewers to chew on when its characters aren't in the air.

Critics Consensus: Though it features some of the most memorable and electrifying aereial footage shot with an expert eye for action, Top Gun offers too little for non-adolescent viewers to chew on when its characters aren't in the air.

Critic Consensus: Though it features some of the most memorable and electrifying aereial footage shot with an expert eye for action, Top Gun offers too little for non-adolescent viewers to chew on when its characters aren't in the air.

Devil-may-care navy pilot Pete Mitchell (Tom Cruise) is sent to Miramar Naval Air Station for advanced training. Here he vies with Tom Kasansky (Val Kilmer) for the coveted "Top Gun" award. When not so occupied, Mitchell carries on a romance with civilian consultant Charlotte Blackwood (Kelly McGillis). Shaken up by the death of a friend, Mitchell loses the Top Gun honor to Kasansky. Worried that he may have lost his nerve, Mitchell is given a chance to redeem himself during a tense international crisis involving a crippled US vessel and a flock of predatory enemy planes. The story wasn't new in 1986, but Top Gun scored with audiences on the strength of its visuals, especially the vertigo-inducing aerial sequences. The film made more money than any other film in 1986 and even spawned a 1989 takeoff, Hot Shots. An Academy Award went to the Giogio Moroder-Tom Whitlock song "Take My Breath Away." ~ Hal Erickson, Rovi

If you like airplane movies, Top Gun is about one-third of a dazzler, and the rest is at least watchable.

The film's intensity mirrors the competitive and wild personalities of the pilots themselves. In this arena, the casting is on-target.

The movie, in short, hits its emotional marks, but it does so with such insistence that it feels less like real life than an object lesson in the architecture of the blockbuster.

There are elements that hold up - especially Cruise's blinding charisma. The aerial scenes are still thrilling, and perfectly suited to a giant screen. Everything else? Well, that depends on how nostalgic you're feeling.

The aerial sequences in Top Gun are as thrilling -- while remaining coherent -- as any ever put on film.

While it's still enjoyable to this day, Top Gun is very much a film of 1986 (35th anniversary)

It's a big, dumb movie that was probably bad for the world, and it's also totally awesome.

When the film isn't having characters stew over personal dramas, complicated histories, or contrived camaraderie, Cruise and McGillis do a pretty good job of flirting.

Slickly made, it's a fairly entertaining watch that doesn't provide much beyond surface thrills, although many have had fun analyzing its (unintentional?) homoerotic content.

Tony Scott brought some incredible shots to the film, mounting cameras everywhere on the fighter jets to achieve amazing footage while giving the audience the feeling they were flying right alongside Maverick.

Could Top Gun actually be a portrait of the dark side of American individualism?

Still one of the best action films around.

Top Gun is a really good film, and is well worth watching. It is entertaining to watch, as something is always happening. Tom Cruise plays Maverick, a cocky pilot, who goes to Top Gun - for the best of the best. He is quite big headed, and gets the lady he likes .. eventually!!! There are some great moments in this play - funny, happy and sad. It has something for everyone - comedy, action, romance. It is really worth buying this film, as it is great to watch, however many times you have seen it. This film has stood the test of time. It came out about 20 years ago, and yet it is still enjoyed by many people. which just proves what a fantastic film it is! 4 Stars 2-1-2001 (Updated)

One can appreciate the film for being iconic, yet it is frustratingly bland and corny. Though Top Gun is full of action, nothing really happens, and the charming romance that inspires the classic hit "Take My Breath Away" becomes a vague, second-thought.