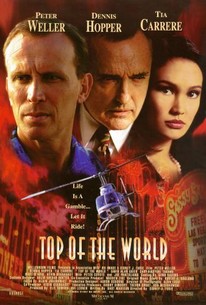 Top of the World Photos

In this high-tension drama, Ray Mercer (Peter Weller) is a former cop who was kicked off the force and sent to prison after it was discovered that he embezzled $4,000 from the police officers' pension fund. Shortly after he's released on parole, Ray and his wife Rebecca (Tia Carrere) decide to get a divorce and head to Las Vegas where they can get it over with quickly. Rebecca wants to visit a casino, but Ray's conditions of parole forbid it; while he waits for her outside as she gambles, he hands a few bucks to a casino hostess and asks her to play a slot machine for him. Ray thinks good luck is finally with him when the machine pays off a $450,000 jackpot, but that's just before a group of ambitious thieves circle the casino to pull a massive robbery. The local police are convinced that Ray is somehow in on the crime; he jumps in to help in hopes of clearing his name, and he discovers evidence that suggests that the owner of the casino, Charles Atlas (Dennis Hopper), may have engineered the robbery on his own operation. Also released as Cold Cash and Showdown, Top of the World features Peter Coyote and David Alan Grier in supporting roles.

Critic Reviews for Top of the World

There are no critic reviews yet for Top of the World. Keep checking Rotten Tomatoes for updates!

Audience Reviews for Top of the World

There are no featured audience reviews yet. Click the link below to see what others say about Top of the World!

Top of the World Quotes