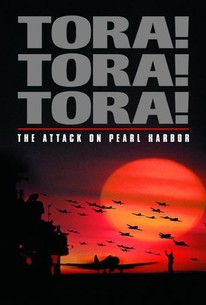 Critics Consensus: Tora! Tora! Tora! is scrupulously accurate and lays out of the tragedy of Pearl Harbor with intricate detail, but the film's clinical approach to the sound and fury signifies little feeling.

Critics Consensus: Tora! Tora! Tora! is scrupulously accurate and lays out of the tragedy of Pearl Harbor with intricate detail, but the film's clinical approach to the sound and fury signifies little feeling.

Critic Consensus: Tora! Tora! Tora! is scrupulously accurate and lays out of the tragedy of Pearl Harbor with intricate detail, but the film's clinical approach to the sound and fury signifies little feeling.

This 25-million dollar epic collaboration accurately recreates the events that led to the Japanese attack on the American naval base during World War II. With Germany's invasion of Poland on September 1, 1939, the wheels are set in motion by Japan to plan the attack. After internal differences in the government, the Japanese quickly mobilize plans for the assault. Key American personnel ignored warnings of the possibility of Japanese aggression. The first part of the film divides scenes from both countries. Part two contains spectacular battle scenes of the bombing that destroyed the American naval base of operations in Hawaii. Governmental errors on both sides add to the confusion, but the Japanese ultimately carry out the deadly mission. The film did well in Japan, did not do well in the he United States, and took years to make back the production costs. It remains an insightful and well crafted World War II action drama that was the result of years of negotiations between the two countries. ~ Dan Pavlides, Rovi

Kazuko Ichikawa
as Geisha in Kagoshima

Both overall director Richard Fleischer and his Japanese counterparts do a dull job, and the monotonously low-key tone of scene after scene almost suggests that each was filmed without a sense of ultimate slotting in the finished form.

This big-budget, noble-but-dull account of the run up to Pearl Harbour is high on historical veracity but low on drama.

The climax, in particular, manages to be more than just a shoot-out, with Fleischer's intelligent direction generating a real feeling of chaos and apocalypse.

As history, it seems a fairly accurate account of what happened, although it never much bothers its head about why. As film art, it is nothing less than a $25-million irrelevancy.

Tora! Tora! Tora! is one of the deadest, dullest blockbusters ever made.

It's rare for a feature film to attain the trifecta of entertaining, informing, and educating.

Even the air-raid, one of those all- out bits of Hollywood destruction staging which offer plenty of time for sour speculation on the sheer cost of so much bang-bang cinema, should leave human casualties taking second place to the material smash-up.

Prior to "Tora!" movies showing the attack were jingoistic propaganda; afterwards, the attack was an excuse to indulge in Hollywood's fascination with American self-loathing.

Expensive but ultimately rather empty.

The Japanese sneak attack that plunged the US into WW II is lavishly and fairly accurately, if not enthrallingly, brought to the screen.

The film looks gorgeous in HD, and remains the best Hollywood treatment of Pearl Harbor.

Tora! Tora! Tora! is a thrilling war epic that delves into one of the seminal events in American history. Beginning with the summer of 1941, the film follows the events in the U.S. and Japanese militaries as the two countries head down a path toward war, culminating in the attack on Pearl Harbor. The filmmakers take a largely dispassionate view, showing both sides as professional soldiers committed to their duty (leaving politics out of it). However, this results in a rather thin narrative that has too many characters. Still, the action scenes are well-done, creating an intense and riveting depiction of the attack. An ambitious historical drama, Tora! Tora! Tora! delivers a comprehensive look at the build-up to America's entry into World War II.

Co-directed in English and Japanese by Richard Fleischer and Kinji Fukasaku, this shows a gripping story doesn't need any relatable characters or trite romances (are you listening Mister Bay?). A cast of some of the best character actors of the era coupled with the elaborate and realistic staging of the Pearl Harbour attack make this compelling viewing.

Tora! Tora! Tora! is a flawless dramatization of the Pearl Harbor attack of December 7th, 1941. One thing I admire about this film that it shows both sides of the story. The film goes into detail on the planning of the attacks, and we get to see a more in depth reason as to why the Japanese carried out the attacks of December 7th 1941. Tora! Tora! Tora! is an incredible film, a well accomplished war film. Critics as usual were wrong in giving this film negative reviews because this film is brilliant. If you know your history, you'll realize that Tora! Tora Tora! is a well researched and authentic piece of cinema. The films aerial sequences are obviously the highlight of the film, and they are simply stunning to watch. The acting is superb and the pacing of the story is well established throughout the film. The first hour of the film surrounds the planning of the attack itself, and the second hour is focused on the attack. The film shows how the American weren't ready, and how they ignored multiple warnings of a Japanese imminent threat. Tora! Tora! Tora! is an authentic war film with minor flaws that will appeal to every War or history buff. This is a superb film that shouldn't be passed up by fans of war films. A superior piece of cinema thats very authentic to the actual events, Tora! Tora! Tora! remains the best film on that dramatizes the faithful attacks on December 7th, 1941. If you want the definitive film that dramatizes the attacks on Pearl Harbor, then give Tora! Tora! Tora! a view. The film is far superior to Michael Bay's train wreck, Pearl Harbor.

In absolutely every respect this movie is far superior to Pearl Harbor of a few years ago. Rather than using the pending Japanese attack as the backdrop for a fictional romance, "Tora Tora Tora" faithfully recounts the events leading up to December 7, 1941, and then offers a chilling portrayal of the attack itself. In spite of being over 30 years old, the effects used during the attack scenes are excellent, and create the feeling that one is right there as they happen. The performances are solid although unspectacular, which seems appropriate. Clearly the desire of Directors Richard Fleischer and Kinji Fukasaku was to let the events speak for themselves, and in this they succeeded. The movie is told from both the Japanese and American points of view, and one of the better aspects of it was that the scenes on board the Japanese fleet were shot using the Japanese language, rather than having the Japanese speaking English with Japanese accents. I felt that this added to the authenticity of the movie. The confusion, miscommunication and poor preparedness of the U.S. is truthfully recounted, as is the division between the military and political machinery over various issues: the choice of Pearl Harbor as the base for the Pacific Fleet, and the decision to transfer navy resources from the Pacific to the Atlantic. I rather thought the special effects were brilliant just think back then there was no CGI every thing had to be done by hand. Even today it still looks 100% convincing. The acting from both sides of the war Japanese and American I thought was very good. But some scenes in the movie do drag on a bit. We spent an inordinate amount of time watching Japanese Zeros taking off from the deck of a Japanese carrier and it's somewhat difficult to establish the timeline of the movie, particularly in the first hour or so, but overall this must surely be the definitive movie version of the attack on Pearl Harbor. Everyone interested in the "day that will live in infamy" should watch this. Keikos score 91-100