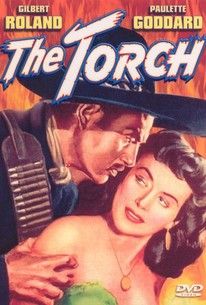 The Torch was originally released in Mexico as La Malquerida. It also bore several other titles, including Duelo en las Montanas, Del Odio Nacio el Amor and The Beloved. By any name, this is the story of a fear-inspiring revolutionary general (Pedro Armendariz) who develops a passion for the daughter (Paulette Goddard) of a wealthy villager. It's hate at first sight so far as the girl is concerned, but this will soon change. Designed as a dual-market production, The Torch was produced by star Paulette Goddard and RKO's Bert Granet, and directed by volatile Mexican filmmaker Emilio Fernandez. The international supporting cast includes Gilbert Roland as a kindly priest and Walter Reed as an American doctor who also yearns for Goddard.

Antonia Daneem
as Adeli
View All

Critic Reviews for The Torch

There are no critic reviews yet for The Torch. Keep checking Rotten Tomatoes for updates!

Audience Reviews for The Torch

Overbaked drama that's full of holes. Paulette, apparently trying to portray a 20-25 year old at 40 and looking 50 sports some of the most unflattering hairdos the screen has ever seen. Usually a fine actress she chews the scenery here to a colossal degree.