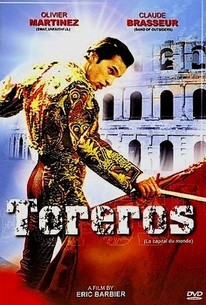 Bullfighting runs in the family in writer/director Eric Barbier's tale of a rising young corrida star whose promising career is cut tragically short. Manuel Balestera (Oliver Martinez) was a natural star in the ring until a fateful miscalculation sent his life into a downward spiral. Later, after being convicted of drug trafficking and spending to two years behind bars, Manuel travels to his hometown to discover that his father has accrued a sizable debt from the local crime kingpin. Subsequently realizing that the only way to save his father is to step back into the ring and face his greatest fear, the man who once swore never to battle a bull again must finally live up to his true potential or risk seeing his father perish at the hands of ruthless gangsters. ~ Jason Buchanan, Rovi

There are no critic reviews yet for Toreros. Keep checking Rotten Tomatoes for updates!

There are no featured reviews for Toreros at this time.