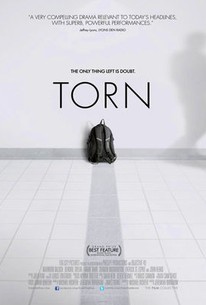 An unexpected bond forms between two women when their sons are killed in an explosion at a local shopping mall. When the police find evidence of a bomb, one of the sons, a Muslim American, becomes the prime suspect, threatening the two mothers' new friendship and forcing them to question how well they knew their own children. Torn is a powerful dramatic journey that invites each of us to confront our own perceptions of the world and one another. Starring Mahnoor Baloch (Pakistani model, TV & film star in her U.S. film debut), Dendrie Taylor (The Fighter, Sons of Anarchy, True Blood and the upcoming Saving Mr. Banks), Faran Tahir (Iron Man, Star Trek, Elysium), John Heard (Chilly Scenes of Winter, Cutter's Way), Patrick St. Esprit (Hunger Games: Catching Fire, Sons of Anarchy), Sharon Washington (Michael Clayton, Die Hard: With a Vengeance). The Bay Area-based production team was led by Michael Richter as writer/producer, and Jeremiah Birnbaum as director/producer. (c) Official Site

Jacob Richter
as Boy in Mall

Critics Consensus: The Counselor is Eccentric but Uneven

It's a portrait of grief and devastation, and also of the ways in which the police and media can jump to conclusions and feed off of the public's anger and confusion.

A post-post-9/11 melodrama that only occasionally lives up to its noble ambitions.

It does something a lot of better-financed Hollywood movies don't: It makes you think.

"Torn" sensitively explores the aftermath of a mall bombing through the eyes of two mothers who each lost a teenage son in the explosion.

Directed by Jeremiah Birnbaum, Torn dissects the tenacity with which the media can jump on a story, manipulating the facts to suit a certain narrative, and by doing so, exposing buried prejudices in ourselves.

Doesn't hit us over the head with the "us against them" front story.

An emotionally lukewarm take on grieving and guilt in the aftermath of an act of mass murder, but not without its melodramatic merits.

The filmmakers' big achievement here is the way they deal with [the story], never once resorting to the mawkishness or ugly rabble-rousing hype which all too often accompanies this subject.

Past its bland title and handful of overwrought soap-opera moments, Torn rings with the sound of quiet truth.

There are no featured audience reviews yet. Click the link below to see what others say about Torn!