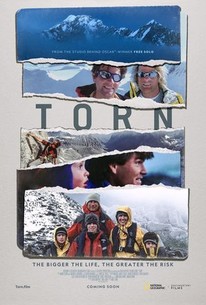 Widely hailed as the greatest mountaineer of his generation, Alex Lowe was a towering figure in the world of outdoor sports. But he loomed even larger for his oldest son, Max, who was only 11 in 1999 when Alex was buried by an avalanche along with cameraman David Bridges while attempting to ski the north face of Mount Shishapangma in the Tibetan Himalaya. Seventeen years after their deaths, Lowe's and Bridges' bodies were found by two climbers attempting the same route, and in the following months, Lowe's family journeyed to the remote mountain to recover them. In the powerful and deeply moving new documentary TORN, director Max Lowe examines the long-buried feelings this unearthed for him and his family, including his mother, Jennifer; his younger brothers, Sam and Isaac; and his stepfather, Conrad Anker, Alex's climbing partner and best friend.

Conrad Anker
as Self

Part family therapy, part weapons-grade tearjerker, this quite lovely documentary from the novice film-maker Max Lowe is an attempt to grapple with the implications of his father's death.

One of its pleasures is that everyone here is thoroughly decent, with a real story to tell.

[A] family story given elegant structure and poignancy...

Satisfyingly emotional without ever feeling sensationalized...

Superficially a documentary about a famous mountaineer, but really the story of a young man trying to understand why a father would risk his family to go mountain climbing, and why another mountain climber was able to find a more harmonious balance.

If there's a bit of slick corporate impersonality to the National Geographic packaging, the content remains involving, and the swift editorial pace has no lulls to risk losing viewer attention.

A fascinating portrait of a remarkable man.

Torn is a moving portrait of a family coming to terms with, and moving on from, their grief.

An incredibly personal story... welling with such raw emotions it's hard to avoid tearing up.

The filmmaker clearly finds catharsis in telling his own story, but moviegoers will discover value, too, in this poignant glimpse into the allure of danger, and the grief that can be left behind.

When Alex [Lowe] used a camera to capture his remarkable feats, there's something poetic about Lowe employing it once more for what seems impossible.

"Torn"... by its quiet ending, has demonstrated how unexpected bonds can form around those in grief.

There are no featured reviews for Torn at this time.