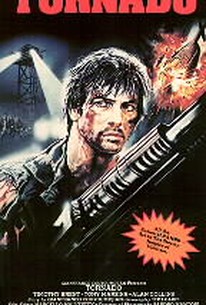 This Vietnam-era drama (lensed in the Philippines) stars Timothy Brent as a Green Beret. Attempting to rescue a wounded soldier, Brent is himself seriously injured and left to die by heartless commanding officer Tony Marsina. But Brent isn't about to die just yet: he spends several grueling days hacking his way through the jungle, for the express purpose of beating Marsina to a pulp. Facing a court martial, Brent escapes to the wilds of Cambodia, where he determines to live out the rest of his life. Tornado director Anthony Dawson (Antonio Margheriti) is best known to American audiences for his horror and spaghetti-western efforts of the 1960s. Filmed in 1983, Tornado finally hit the screens two years later. ~ Hal Erickson, Rovi

There are no critic reviews yet for Tornado. Keep checking Rotten Tomatoes for updates!

There are no featured reviews for Tornado at this time.