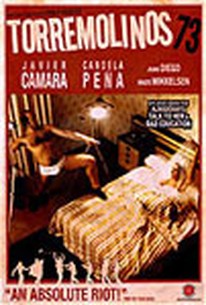 Critics Consensus: A light tale that's big on heart, this spicy snapshot of domestic sexuality in '70s Spain treats its wacky protagonists with enough gentle humanity to be delightfully entertaining.

Critics Consensus: A light tale that's big on heart, this spicy snapshot of domestic sexuality in '70s Spain treats its wacky protagonists with enough gentle humanity to be delightfully entertaining.

Critic Consensus: A light tale that's big on heart, this spicy snapshot of domestic sexuality in '70s Spain treats its wacky protagonists with enough gentle humanity to be delightfully entertaining.

Torremolinos isn't perfect, but it stands as an amusing entry into the world of art-house cinema.

As a first feature-length effort for Berger, Torremolinos 73 shows promise of a director with a humane touch, with or without the extra skin.

The narrative eventually runs out of steam. But writer-director Pablo Berger maintains a lighthearted tone.

Shifts in tone but always remains affectingly sweet and human.

It works, but just barely (no pun intended, considering all the nudity).

A small, honest comedy about passion, movies and love, so human that it leaves a bittersweet aftertaste that may soften the laughter and provoke some reflection.

A polyester and bri-nylon must for fans of art house and pornography alike. Yeah, like there's a difference.

A bawdy sitcom which careens back and forth between the ridiculous and the sublime.

The film ranges from wacky and hilarious to downright romantic, yet Berger manages to shift tone smoothly and expertly. He's aided by top performances from his leads.

The humor is mostly low-key, with writer/director Pablo Berger doing little to draw attention to his film's highly unusual premise.

An amiable, if not exactly novel, Spanish farce

[font=Century Gothic][color=indigo]"Torremolinos 73" starts out with an unsuccessful encylopedia salesman making the rounds in 1973 Spain.(Well, if somebody showed up on my doorstep with a bust of Francisco Franco, I would slam the door in his face, too.) The company he works for has decided there is more money in making educational sex films for a Scandinavian company. Well, what is a soon-to-be-homeless married couple supposed to do? Oh, and his wife desperately wants to have a baby...[/color][/font] [font=Century Gothic][color=#4b0082]"Torremolinos 73" is an amusing satire of sexual and social attitudes and filmmaking. There are very good and convincing performances from the two leads.[/color][/font]