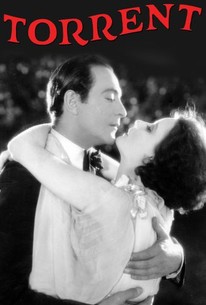 The Vincent Blasco-Ibanez novel Entre Naranjos served as the inspiration for Greta Garbo's first American film, The Torrent. Garbo plays Leonora, a full-bodied Spanish peasant girl who falls in love with her landlord's son Don Rafael Bull (Ricardo Cortez). To prevent his son from marrying beneath his station, Don Rafael's father banishes Leonora from his property. She relocates in Paris, where she achieves fame and fortune as an opera singer, while back at home Don Rafael becomes a prominent politician. When Leonora returns home, she spurns his offers of marriage, even during a raging flood in which her life is in Don Rafael's hands. After this spectacular sequence, the film's surprisingly unhappy ending seems anticlimactic. Garbo's lover-mentor Mauritz Stiller had originally been slated to direct The Torrent, but at the last minute MGM opted for house director Monta Bell. Whether or not Stiller could have compensated for the script's more ludicrous passages is open to conjecture: Suffice to say that, without Garbo's presence, The Torrent would have been just so much Spanish applesauce.

Mario Carillo
as King of Spain
View All

There are no critic reviews yet for Torrent. Keep checking Rotten Tomatoes for updates!

Garbo radiates star quality and looks astonishing in most of the extreme fashions she finds herself in. As for the film it's just another soap opera.

1926 "torrent" is divine greta garbo's american debute starring the soon to be unknown ricardo cortez (the first sam spade in 1930 maltese falcon), despite louis b mayber's dimissive criticism of garbo as "tall, chulky peasant," garbo still shimmers without adrian's endorsements of glamour until her later cooperation with john gilbert in "flesh and the devil" which catapults garbo into the niche of aboslute seductress in silent cinema. there're some vividly binary conceptualization abound in the early cinema, and the dichotomy of madonna/whore thrives in this primtivee stage of cinema to resonate the stark vision without vocal expressions. garbo plays a ghetto girl abandoned by some spanish peasant due to his mother's disapproval. somehow stimulated by the man's cowardice, garbo re-embodies herself into the parisian prima donna surrounded by numerous patrons. melodramaticity is something which circumvents the silent cinema as nowaday audience could easily predict the following plots. later the prima donna decides to return her hometown village then she rekindles her torch of passion with her first love during one incident of local hurricane. under the pouring rain, the symbol for the torrent of passion, the lovers re-unite together and whisper their tender language of love. of course, the story wouldn't end like fairy tale because the vampy temptress cannot be dignified due to the dichotomy of feminity, and she must be incarnated into a sardonic mockery of conventional womanhood. what happens is that the man's mother schemes to estrange her son from this femme fatale by coering bitter words to the man like "she's the woman who has been owned by many men and you would be the laughing stock of europe"...so the man deserts the woman again due to his manly pride as well as a moralistic string of female chastity, but years later, they meet again while he's been aging into a grey-haired saggy man but she still remains her prime looks of youth. eventually it is her turn to discard him away with an avenging sneer to the bond of matromony. richardo cortez fades away after this movie with garbo who literily monopolizes the spotlight as an illuminator at stance. "torrent" demonstrates greta garbo's great potentiality as the screen goddess and in every scene she shines with an iceberg insouciance, but each gaze is smoldering with simmering passion.