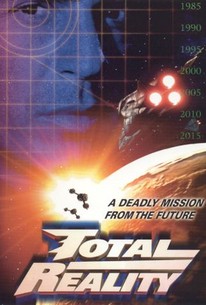 A soldier must confront the past to save the future in this sci-fi adventure. In the year 2128, the Earth has become a battleground, where the forces of fascist leader Gen. Tunis (Thomas Kretschmann) have been beaten into submission. However, the victory of the anti-fascist Alliance has come at the expense of much of the planet, which has been laid to waste by Tunis's forces. Refusing to surrender, Tunis instead finds a way to travel back in time to the late 1990s, where he formulates a plan to alter history to his advantage -- and put the fate of the world in jeopardy. However, Lt. Anthony Rand (David Bradley), an Alliance soldier who fights bravely but by his own rules, gets wind of Tunis's scheme; with the help of a group of condemned prisoners, Rand follows Tunis back in time in a desperate effort to save mankind's future. Total Reality also features Ely Pouget, Bill Shaw, and Robert Blanche.

Shannon Day
as Barbara
View All

There are no critic reviews yet for Total Reality. Keep checking Rotten Tomatoes for updates!

There are no featured audience reviews yet. Click the link below to see what others say about Total Reality!