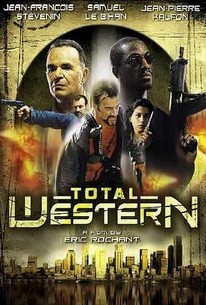 In this tribute to the Spaghetti Western, amiable ex-con Gerard (Samuel Le Bihan) agrees to help his boss' nephew infiltrate an urban fortress to carry off a drug deal with representatives of mob boss Ludo Daes (Jean-Pierre Kalfon). Unfortunately, the nephew goes a bit nuts and causes a shoot-out, and Gerard is the only one to emerge from the fracas alive. Armed with a duffel bag full of several million of Daes' francs, he flees Paris for the countryside and finds work at an isolated cheese-producing farm, where his co-workers are six inner-city toughs being given a chance to reform their lives outside of prison. Gerard starts to eke out an agreeable existence with the delinquents, but Daes wants his cash back, and, in the company of some Central European thugs, pays Gerard a visit. Together with the kids, Gerard attempts to outsmart the mobster. ~ Rebecca Flint Marx, Rovi

There are no critic reviews yet for Total Western. Keep checking Rotten Tomatoes for updates!

There are no featured reviews for Total Western at this time.