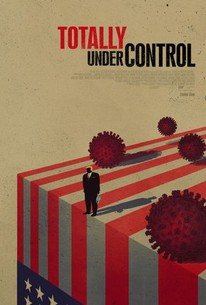 Critics Consensus: Totally Under Control does a commendable job of distilling current events into a clear-eyed overview that's as engaging as it is enraging.

Critics Consensus: Totally Under Control does a commendable job of distilling current events into a clear-eyed overview that's as engaging as it is enraging.

Critic Consensus: Totally Under Control does a commendable job of distilling current events into a clear-eyed overview that's as engaging as it is enraging.

At this moment 190,000 Americans have died from COVID-19. From July 15 to August 31, the death toll was running at an average of 1000/day. That's double the number of those who perished on 9/11 every week. The carelessly designed lockdowns and their long-lasting economic effects have led to massive job losses (23 million/14.7% in April), widespread hunger, dislocation and a runaway federal deficit. Had the federal government done its job properly -- by following clear guidelines in place based on past pandemics -- most of the death and destruction could have been avoided. While the current administration makes its claims for a job well done, the fact is that the US response to COVID-19 is one of the worst, with 4% of the world's population and 21% of the deaths. How did this happen? On January 20th, 2020 the US and South Korea both discovered their first cases of COVID-19. However, 9 months later, the novel Coronavirus has claimed the lives of almost 200,000 Americans and caused staggering economic damage, while in South Korea, there were no significant lockdowns and, in an urbanized population of 51 million, only 344 lives have been lost. Where did we go wrong? As the presidential election nears, Americans are increasingly enraged by a lack of clear leadership, endemic political corruption and left to wonder how did the wealthiest and most powerful country in the world manage to fail so thoroughly in its response to a global pandemic? Academy Award-winning filmmaker Alex Gibney, directing with Ophelia Harutyunyan and Suzanne Hillinger, interrogates this question and its devastating implications in Totally Under Control. With damning testimony from public health officials and hard investigative reporting, Gibney exposes a system-wide collapse caused by a profound dereliction of Presidential leadership. It will be a generation before we know the full extent of the damage wrought by this pandemic, but Totally Under Control will stand as the definitive account of the Trump administration's incompetence, corruption and denial in the face of this global pandemic.

News & Interviews for Totally Under Control

View All Totally Under Control News

Critic Reviews for Totally Under Control

None of the fancy gimmicky in "Totally Under Control" can top the sheer emotional turmoil on display from its key subjects.

This is about as timely as a documentary can be, and yet it's already in need of an update.

It takes a village to burn itself to the ground, and no one is better at contextualizing such huge events, and structuring the information into a clear and transparent narrative, than documentarian Alex Gibney.

A timely and competent first chapter, but it's only a fragment of a story that's still being written.

It's sobering, often indecently gripping material that, in broad strokes, confirms widely circulated impressions of the Trump White House as a nest of kleptocratic science-bashing vipers.

Ready to feel the fresh white-hot Hell of unbearable outrage?

Totally Under Control tells an unfortunate story of bureaucratic indifference to an invisible killer.

Sadly, this expert and powerfully important film likely will spawn a sequel before all of this is finally over. Look at Totally Under Control as Act I.

If you've been following the COVID news, you may think you know the story behind the U.S. government's response. But we learned new things from this documentary.

If you've somehow gotten to 2020 without forming a complete, informed opinion of the political landscape in the U.S., carve out two hours and settle in for a crash course.

Totally Under Control is yet another indictment of the Trump administration in a year that has been full of them.

There are no featured reviews for Totally Under Control at this time.