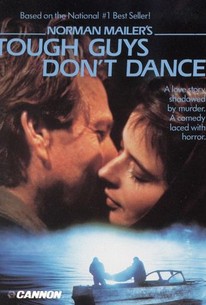 Norman Mailer wrote and directed this demented film noir, which takes place in a Provincetown of perpetual twilight. Most of the tale, based on his best-selling novel, is told in flashback as Dougy Madden (Lawrence Tierney) pays a visit to his son Tim (Ryan O'Neal). Dougy, a tough ex-bartender, is ravaged by cancer and decides to see Tim one last time in order. But Tim is suffering both from writer's block and from the effects of too many years of drink, drugs, and sex. His sexy wife Patty Lariene (Debra Sandlund) has recently left him and disappeared. Even worse, one morning he awakens from his stupor to find the front seat of his car covered with blood and a severed head inside his drug stash. He tries to rekindle a relationship with his ex-wife Madeleine (Isabella Rossellini), now married to the psychotic Provincetown police chief, Alvin Luther Regency (Wings Hauser), and he re-acquaints himself with old prep school friend Wardley Meeks III (John Bedford Lloyd), who was also married to the missing Patty Lareine. As the murders pile up and Tim's psyche takes a beating, Dougy decides to help Tim put an end to this chaotic mess of murders.

John Snyder
as Spider
View All

Neither thrilling nor horrific, the camera, plotting, dialogue and atmosphere are uniformly unconvincing: a conservatoire of false notes.

Not the high point of the Mailer career, but it's a small, entertaining part of it.

Hard to classify; at times you laugh raucously at what's up on the screen; at others you stare dumbly, in stunned amazement.

What is strange is that Tough Guys Don't Dance leaves me with such vivid memories of its times and places, its feelings and weathers, and yet leaves me so completely indifferent to its plot. Watching the film, I laughed a good deal.

...for bad movie fans, it's a masterpiece of over-ripe dialogue, ridiculously melodramatic situations, and rabid, macho posturing that curdles the moment it hits the screen...

After the first few minutes that are entertaining because of its excesses, the rest feels exhausting. [Full Review in Spanish]

The kind of lousy cinema that breathes and captures the imagination more than a conventionally good movie can.

There's no denying Mailer is a man with vision, and the eloquence to describe it. It's just that the vision is so troubling, so mean and raw and frightening.

There are no featured audience reviews yet. Click the link below to see what others say about Tough Guys Don't Dance!