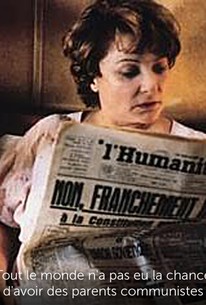 This bright domestic drama captures a moment in time when, for a large number of idealistic and grateful French men and women, the promise of Russian communism was bright, and everything Russian was a source of joy and amazement. In the story, Irene (Josiane Balasko) was rescued from Auschwitz by soldiers from the U.S.S.R., and since that time she has enthusiatically considered Russia to be the source of hope in the world. Her more pragmatic husband (Maurice Benichou) has, by 1958, grown somewhat weary of her enthusiasm, which has led her to decorate their apartment with anything Russian she can get her hands on. Matters come to a head when she is befriended by three members of the Red Army Choir during their tour of Paris.