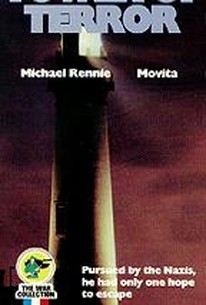 Tower of Terror is set in a lonely lighthouse on a tiny German-controlled island. Demented lighthouse keeper Kristan (Wilfred Lawson) is terrified that someday, somehow, the world will know that he murdered his wife 16 years earlier. Though he openly discourages visitors, Kristan is forced to play host for an odd assortment of strangers: A British secret agent (Michael Rennie),a German naval officer (John Longden) and a beautiful concentration-camp escapee (Movita). The latter so closely resembles Kristan's late wife that the old man goes completely round the bend, ordering the poor girl to dress in his wife's clothes and ultimately attempting to do her in as well. This juicy slice of Grand Guignol was produced in England by Pathe in 1941 and released in the US by Monogram the following year. ~ Hal Erickson, Rovi

Olive Sloane
as Florist
View All

Critic Reviews for Tower of Terror

There are no critic reviews yet for Tower of Terror. Keep checking Rotten Tomatoes for updates!

There are no featured reviews for Tower of Terror at this time.