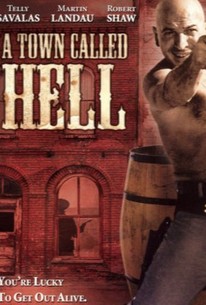 A decade after a woman's husband is murdered alongside a group of fellow Christians, she seeks bloody revenge. In this Robert Parrish-directed action drama, Alvira (Stella Stevens) looks to make it through this dangerous Western town, which is now run by a dictator with an iron fist named Don Carlos (Telly Savalas), while the man responsible for the original murders (Robert Shaw) now lives a second life. Written by Richard Aubrey, the films co-stars Martin Landau (Crimes and Misdemeanors) as The Colonel.

Robert Shaw
as The Priest

Martin Landau
as The Colonel

Vicente Soler
as Priest No 1

It does offer some gruesome action and a watchable cast.

This is wannabe spaghetti western, My Copy came from the Wild West Box Volume 2, The film quality was at best poor, Stella Stevens plays the widow looking for her husbands killer. 10 years before in this town a priest and a group of Christian followers were massacred one of which was Stella's husband. Telly Savalas plays a sleazy Mexican dude who is the leader of the group. So what we have is 90 minutes of lets find out who done it, but we knew 5 min into the movie, so we have fighting shootouts and in the end good fine killing. Nothing more then 2 stars.