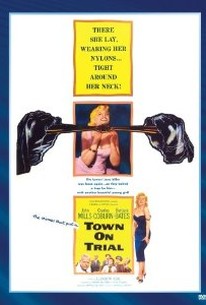 Town On Trial! begins with the murder of a good-time girl in a small suburb of London. Scotland Yard inspector John Mills is called on the scene, immediately launching his investigation by bullying everyone in sight. Mills is particularly aggravated by the prejudicial, hypocritical attitude of most of the suspects. He is so determined to blame the whole town for the poor girl's death that he nearly lets the actual killer slip through his fingers. Town On Trial! was based on a series of magazine articles by Francis Durbridge, published under the umbrella title The Nylon Murders. ~ Hal Erickson, Rovi

Critic Reviews for Town on Trial

Likeable though he is, John Mills seems implausible as a Scotland Yard superintendent...

There are no featured reviews for Town on Trial at this time.