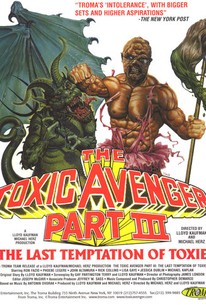 Upon temptation from Satan himself, Melvin Junko (aka the Toxic Avenger) has visions of yuppiedom dancing in his head when he begins working for an evil Japanese conglomerate which plans to destroy the world (including Melvin's hometown) with toxic waste. When he realizes what he is doing, he becomes the mutant superhero and begins, again, his heroic crime fighting.

Critic Reviews for Toxic Avenger 3: The Last Temptation of Toxie

There are no critic reviews yet for Toxic Avenger 3: The Last Temptation of Toxie. Keep checking Rotten Tomatoes for updates!

Audience Reviews for Toxic Avenger 3: The Last Temptation of Toxie

As i've said in my reviews for the first two films, you can't take these films and compare them to a "classic" as thats not the point. I don't normally like cheesey films but found the first three to be laugh out load funny. Maybe i've a screw loose but I just think they're great. Again, i'm not going to give the plot out because I don't feel like it. And i'm not going to say whats good and whats bad (mostly because I couldn't think of anything bad). If you really aren't bothered about the film, watch it and point out the continuity and poor acting. If you don't watch to enjoy or nitpick, watch for Phoebe (oh phoebe). She is by far too talented to be in a film like this but boy does she look good. Basically, just watch the film... You might not like it, but it's only a film.

New Jersey's only superhero goes to work for the evil toxic waste corporation Apocalypse, Inc., in order to make money for an operation to cure his fiancees blindness. In the Avenger's third outing, the attempts at comedy have become ridiculously cartoonish and juvenile, and there's way too much dull plot; a step backwards for a series that wasn't that great to begin with.