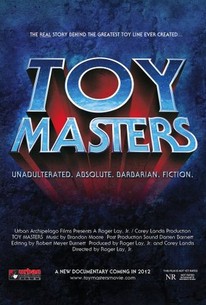 This film is the first ever feature-length documentary on the world-wide phenomenon that inspired an entire generation of children and became a billion dollar franchise--"Masters of the Universe". Filming all over the U.S. "Toy Masters" features interviews with the key creative personnel behind every version of the best selling toy line and all incarnations of "Masters of the Universe" on television, film, stage, and print, tracing the inception and ups and downs of the fantasy juggernaut.

There are no critic reviews yet for Toy Masters. Keep checking Rotten Tomatoes for updates!

There are no featured reviews for Toy Masters at this time.