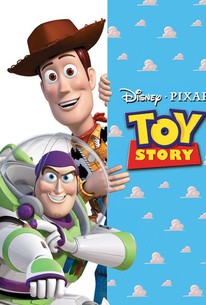 Critics Consensus: Entertaining as it is innovative, Toy Story reinvigorated animation while heralding the arrival of Pixar as a family-friendly force to be reckoned with.

Critics Consensus: Entertaining as it is innovative, Toy Story reinvigorated animation while heralding the arrival of Pixar as a family-friendly force to be reckoned with.

Critic Consensus: Entertaining as it is innovative, Toy Story reinvigorated animation while heralding the arrival of Pixar as a family-friendly force to be reckoned with.

Woody, a traditional pull-string talking cowboy, has long enjoyed a place of honor as the favorite among six-year-old Andy's menagerie of toys. Quick to calm their anxieties about being replaced by newer arrivals, Woody finds his own confidence shaken, and his status as top toy in jeopardy, upon the arrival of Buzz Lightyear, simply the coolest space action figure ever made. Woody plots to get rid of Buzz, but things backfire and he finds himself lost in the outside world with Buzz as his only companion. Joining forces to find their way home, the two rivals set out on an adventure that lands them in the clutches of Sid, a sadistic neighborhood kid who is notorious for dismembering and reassembling "mutant" toys in his bedroom. As "guests" of Sid and his dog, Scud, the two fugitive toys forge a genuine friendship and learn that only through mutual trust and respect do they have any chance of survival.

Joe Ranft
as Lenny the Binoculars
View All

Toy Story takes a number of surprising turns, and though I didn't fall in love with it -- there's a lot of routine clobbering, scrambling, and zooming about -- I remained interested and happy until the end (and children, I think, will adore it).

With "instant classic" written all over it, Toy Story, the first full-length feature entirely composed of computer-generated animation, is a visually astounding, wildly inventive winner.

The rivalry between Woody the cowboy and Buzz the astronaut is worked out as a direct parallel to any other family quarrels and it is this sense of oneness that gives the film its kick.

Pixar classic is one of the best kids' movies of all time.

So ingenious in concept, design and execution that you could watch it on a postage stamp-sized screen and still be engulfed by its charm.

We have seen the future of cartoons, and its name is Toy Story.

Toy Story remains the humanistic, vital film that created the mold for such classics as Finding Nemo and WALL-E.

This eighty minutes are an endless succession of novelties. [Full Review in Spanish]

If you haven't seen the original in some time, perhaps for fear that it won't hold up compared to the later, sleeker releases from Pixar, it's worth rediscovering its pleasures.

This classic landmark of huge advance and innovation in animation is an amazing roller coaster that blends so well a lot of entertaining adventure and delightful humor, while its main strength definitely lies in the endless charisma of its unforgettable characters.

Arguably the biggest film of my childhood. Even today, I return to the film and recite certain lines because they are are so iconic or humorous. The voice cast of Tom Hanks and Tim Allen fit the characters of Woody and Buzz so perfectly, this film should be seen as a major highlight in their careers. From Pizza Planet, to Sid's House and the race for the moving truck, this film features plenty of memorable scenes and locations. Randy Newman's song "You've Got A Friend In Me" is undeniably one of the best songs to be featured in a Pixar film, shame it didn't win the Oscar for 'Best Original Song' that it deserved. Overall, this is my most favored Pixar film of all time. PS: Steve Jobs personally funded Pixar to make this film possible. So those who grew up with this film, remember this is another reason on how Jobs changed the world.

Pixar's first major smash hit and one of the first entirely computer animated films may not have aged well, considering the huge steps CGI characters have taken since 1995. Its biggest assets, a huge beating heart and a great sense of humor, still work so many years later and let you forget about the sometimes flat textures. The story, the characters and the jokes are what draws you into the story and soon after you forget you're actually watching an adventure about living toys. The great voice acting helps too, of course. The result, a glorious collection of exciting and fun action scenes, is so perfect, you sometimes feel the urge to clap applause in responds to the events on the screen. A classic.