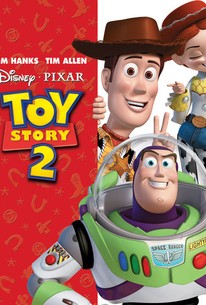 Critics Consensus: The rare sequel that arguably improves on its predecessor, Toy Story 2 uses inventive storytelling, gorgeous animation, and a talented cast to deliver another rich moviegoing experience for all ages.

Critics Consensus: The rare sequel that arguably improves on its predecessor, Toy Story 2 uses inventive storytelling, gorgeous animation, and a talented cast to deliver another rich moviegoing experience for all ages.

Critic Consensus: The rare sequel that arguably improves on its predecessor, Toy Story 2 uses inventive storytelling, gorgeous animation, and a talented cast to deliver another rich moviegoing experience for all ages.

"Toy Story 2" is the exciting, all-new sequel to the landmark 1995 computer-animated blockbuster from Walt Disney Pictures and Pixar Animation Studios. This time around, the fun and adventure continue when Andy goes off to summer camp and the toys are left to their own devices. Things shift into high gear when an obsessive toy collector kidnaps Woody -- who hasn't the slightest clue that he is a greatly valued collectible. It's now up to Buzz Lightyear and the gang from Andy's room -- Mr. Potato Head, Slinky Dog, Rex, and Hamm -- to spring into action and save their pal from winding up a museum piece. There are plenty of thrills as the toys get into one predicament after another in their daring race to get home before Andy does.

Joan Cusack
as Jessie the Cowgirl

Jonathan Harris
as The Cleaner

Tom Hanks
as Woody
View All

Toy 2 is colorful and funny, and the computer-animation from Pixar Animation Studios creates a convincingly detailed environment for the toys.

Toy Story 2 is a brilliant example of that rarest of Hollywood phenomena a sequel to a major hit film thats as good, if not better, than the original.

Pixar's 1995 Toy Story and its superlative 1999 sequel ushered in the supremacy of computer-generated animation.

Filmgoers will need to remind themselves that [the characters were] created by a computer -- not exactly a medium we associate with this kind of love, tenderness and care.

They've done it again. The folks who brought you 'Toy Story now present Toy Story 2, another clever, riotous tale of life in the toy lane.

Pixar, the animation studio that teamed with Disney for both movies, has broken technological ground since the first Toy Story, and TS2 shows off its newest expertise with one smart visual joke after another.

This exquisite, worthy sequel even goes so far as to have fake bloopers at the picture's close.

Toy Story 2 shows how pop art can disarm your loftiest objections with unexpected wit and genuine insight. "Magical" describes it but not its aspects that are superlatively humane.

That rare sequel that lives up to the high standards of its predecessor.

"Toy Story 2" offers as much fun as audiences are likely to have in movie theaters this season.

Mostly I just love spending time with these characters.

Even better than the first film, this sequel benefits from the fact that we already know and care about the characters, which is used in favor of a story that is much richer and more profound than the previous one, becoming another instant classic just as well.

The sequel to the big computer animated landmark success does everything right. It keeps the characters that made the original a hit and gives them depth, new adversaries, friends and dilemmas. That's as heart-warming as hilariously funny, with even more great jokes, movie references and racy action sequences than the first film. The writing is perfect, always pushing the right buttons at the right time, switching from emotional to funny scenes without effort. Just try to keep your eyes dry during Jessie's song. It's also amazing what technical progress this film brings to the table, especially compared to its predecessor. As a rare example of a sequel that easily surpasses its original in every aspect, it is still a beauty to watch 13 years later, makes you laugh, cry and stand in awe of the perfection delivered here. Probably the best animated film ever made.

The sequel provides more laughter and satisfaction with the introduction to new characters and new story. Toy Story 2, although may not be topple it's original, still provides for a fantastic flick for the entire family to enjoy. 5/5