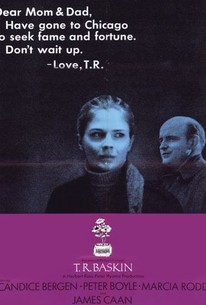 Candice Bergen plays the title character, a naïve young woman from the countryside who ventures to the bright lights of Chicago in search of an interesting career, true love, and happiness. She ends up working a meaningless job and living in a drab apartment, and she remains lonely as her romantic entanglements also misfire. She has an affair with businessman Jack Mitchell (Peter Boyle), which ends terribly. Next she takes up with Larry Moore (James Caan), but that romance also goes nowhere. Peter Hyams wrote the script and produced the film, which was released in England under the title Date with a Lonely Girl. Director Herbert Ross had much better success with romantic-comedy material in later years when he filmed Neil Simon material such as The Goodbye Girl.

Pamela Hoffman
as Receptionist
View All

Peter Hyams' debut production is handsomely mounted, but his screenplay is sterile, superficial and inconsistent.

Peter Boyle, as the salesman, and James Caan, as the swine, do the best they can, which is extremely well indeed, but the movie's clumsy feints at sophistication and its grotesque sentimentality prevail.

T. R. Baskin is never at a loss for words, most of which sound as if they had come straight from the notebook of a writer who spent most of time jotting down funny lines without ever worrying much about character.

The problem is that everyone in the movie acts so stupidly. Real people of average intelligence would have cut through this plot in about three minutes, and the movie would have been over.

Although she raises some interesting questions, Bergen's character evokes neither the sympathy nor the interest intended.

The movie has a story that goes nowhere. It bogs down in trifles and seldom gets away from the tons of trivia.

There are no featured reviews for T.R. Baskin at this time.