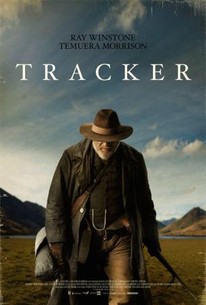 Set in 1903, Tracker is a tense action thriller in which Arjan (Ray Winstone :44 Inch Chest, London Boulevard), a guerrilla survivor of the South African Boer War, lands in colonial New Zealand and is promised a huge bounty to capture Kereama (Temuera Morrison: The Green Lantern, Once Were Warriors), a Maori seafarer accused of killing a British soldier. What should be a simple job for Arjan, a master tracker, turns into a gripping and dangerous game of cat and mouse as Kereama repeatedly escapes and is recaptured - all the while insisting on his innocence. As each man gains and loses the upper hand, they gradually get to know and respect one another. Culminating in an emotional and high risk showdown, they find they have more in common than simply a mutual hatred of the British.

What would Ray Winstone sound like if he did a South African accent? Answer: Exactly the same as he would if he was doing a London, Italian or Kathmandu accent. Like either a homicidal tuba or Muttley with a hangover.

The scenery is glorious, but the movie's a hard slog all the same.

It's nothing special, and the pace lags as we admire the scenery, but the best moments have a thoughtful complexity reminiscent of Jimmy Stewart/Anthony Mann westerns, such as The Naked Spur.

[Winstone] is the main reason to watch Tracker, though the scenery comes a good second.

Would have looked comfortable on television.

An interesting insight into an era rarely seen on film and an atmospheric showcase for Winstone and Morrison's talents - not to mention New Zealand's spectacular landscape.

A relative lack of action, pared with simplistic message-movie sentiments, that hampers what in any other case is a solid movie.

Ultimately, the drama's more satisfying than exciting, but it's a solid entertainment nonetheless.

With Winstone in the lead you won't expect it to have the action power of Seraphim Falls, which starred Pierce Brosnan and Liam Neeson in 2006, but prepare to be surprised.

There are echoes of classics like Hell In The Pacific in Tracker and the seesawing relationship between the two men is entertainingly handled, if repetitive, until some welcome 11th-hour twists in the plot.

Watching Temuera Morrison and Ray Winstone clash is every bit as electrifying as you'd expect, like a pair of roaring juggernauts colliding at 90mph.

An old-fashioned adventure yarn that tramps reassuringly through familiar terrain. At least the destination - not to mention the casting - is more interesting than the journey.

Say what you will about the long intrusive lines at customs these days, but you've probably never had a gun pulled on you like Arjan van Diemen(Ray Winstone) does when he tries to enter New Zealand from South Africa after the Boer War in 1903. And it has less to do with the rifle he is carrying than the long memories of the British soldiers he fought in a dirty war. Still, Major Carlysle(Gareth Reeves) allows him to enter the country, even providing a bit of work in using his tracking skills to find Kereama(Temuera Morrison), a Maori, unjustly accused of murder. The reward is 100 sovereigns alive, 25 sovereigns dead. At first, "Tracker" might seem like a lot of other movies that have come before it with apparently Ray Winstone playing another one of his patented scary badasses. But as time goes on, his excellent performance uncovers previously unseen layers to his character.(And why nobody had thought of casting Winstone as a protagonist in a western before this, I have no idea.) Even Carlysle tries to do his best for everybody concerned. And while we have seen plenty of the beautiful New Zealand scenery before in "Lord of the Rings" and the bughouse "Top of the Lake," what we are exposed to here is the less familiar brutal history of not only that country, but also that of the Boer Wars, both involving people on the wrong end of the mighty British Empire.(I love van Diemen saying he traveled to New Zealand out of curiosity of the British.) All of which adds depth to this already thoughtful and compelling story. And on a very, very minor note, I would have preferred this movie be called "75 Sovereigns."