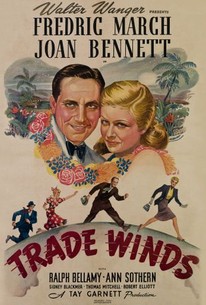 Joan Bennett plays a young woman who believes she's killed bigtime crook Sidney Blackmer. She changes her hair color from blonde to brunette and escapes from San Francisco to parts unknown. Police detective Fredric March is hired to track down Bennett, which he does in the company of two assistants, wisecracking Ann Sothern and dimwitted Ralph Bellamy. March's chase takes him all over the world (courtesy of back-projected shots of Tay Garnett's recent worldwide vacation); when he catches up with Bennett, he falls in love with her. Still, when they reach Frisco again, March turns Bennett in to the authorities, convincing Bellamy and Sothern that their boss is a no-good rat. But it's actually a clever ploy by March to bring the real murderer out in the open. Trade Winds was produced by Joan Bennett's future husband Walter Wanger, who noted the popularity of Bennett's new brunette status and advised her to stay that way...which she did.

Wilson Benge
as Martin, the Butler

There are no critic reviews yet for Trade Winds. Keep checking Rotten Tomatoes for updates!

There are no featured reviews for Trade Winds at this time.