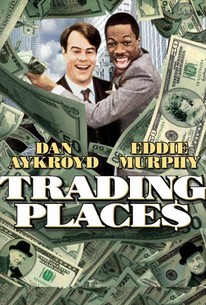 The "nature-nurture" theory that motivated so many Three Stooges comedies is the basis of John Landis's hit comedy. The fabulously wealthy but morally bankrupt Duke brothers (Ralph Bellamy and Don Ameche) make a one-dollar bet over heredity vs. environment. Curious as to what might happen if different lifestyles were reversed, they arrange for impoverished street hustler Billy Ray Valentine (Eddie Murphy) to be placed in the lap of luxury and trained for a cushy career in commodities brokerage. Simultaneously, they set about to reduce aristocratic yuppie Louis Winthorpe III (Dan Aykroyd to poverty and disgrace, hiring a prostitute (Jamie Lee Curtis) to hasten his downfall. When Billy Ray figures out that the brothers intend to dump him back on the streets once their experiment is complete, he seeks out Winthorpe, and together the pauper-turned-prince and prince-turned-pauper plot an uproarious revenge. With the good-hearted prostitute and Winthorpe's faithful butler (Denholm Elliott) as their accomplices, they set about to hit the brothers where it really hurts: in the pocketbook. ~ Hal Erickson, Rovi

Alfred Drake
as President of Exchange

Maurice Copeland
as Secretary of Agriculture

Barry Dennen
as Demitri
View All

Trading Places, in this of all Hollywood years, is a joy to behold -- clever without being smart, affectionate without being sentimental, They can make movies like they used to after all.

Landis' direction is deft, but the sparkling performances are the real draw not only by Murphy and Aykroyd but also by Don Ameche and Ralph Bellamy as the meddling oldsters, Denholm Elliott as the gentlemanly servant and Jamie Lee Curtis.

Trading Places is a comedy of unavoidable fits and starts.

The Saturday Night Live veterans Murphy and Ackroyd are the show-stealers here in this decent family comedy.

Trading Places also makes Eddie Murphy a force to be reckoned with.

This 1983 film re-creates a screwball comedy format and then eliminates everything but the crudest audience-gratification elements; any incursions into the more morally complicated side of the genre are quickly curtailed.

Eddie Murphy and Dan Aykroyd are quite the duo in this funny Christmas film with some strong themes under its hood. [Full review in Spanish]

Since 48 hrs. had yet to be released, Landis and the studio took a big risk casting Murphy, fortunately, the gamble (pun intended) paid off.

...Trading Places is still funny with thanks to Dan Aykroyd and Eddie Murphy but some of the film's racial aspects are problematic in this era.

Juxtaposing iconic architecture and historic statues with this heavily loaded satire examining the intersection of race and class situate Trading Places firmly in its American context.

Trading Places is an excellent comedy -- a bit cold and cerebral, but well-constructed and organized. [Full Review in Spanish]

The Book of Job meets Pygmalion in this intelligent comedy that benefits from great performances (especially by Eddie Murphy), and, no matter how utterly implausible everything we see here is, at least it sells us the whole thing with enough conviction to make it a blast.

That was amazing. Eddie Murphy killed it. Didn't like Winthorpe though.