Trail of the Lonesome Pine1936 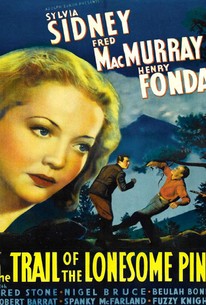 Trail of the Lonesome Pine Photos

Paramount's first outdoor Technicolor feature, Trail of the Lonesome Pine was the third film version of John Fox Jr.'s novel. Inspired by the Hatfield-McCoy feud, the story is set in the Blue Ridge mountains of Virginia. Outsider Fred MacMurray arrives to clear the path for a new railroad. Mountain girl Sylvia Sidney falls in love with MacMurray, which incurs the enmity of Sidney's boyfriend Henry Fonda. It also plunks MacMurray in the middle of a long-standing feud between Sidney's family and another mountain clan. Hostilities alternately erupt and simmer until Sidney's youngest brother (Spanky McFarland) is killed by a feud-inspired dynamite blast. This tragic incident brings virtually everyone to their senses, and the feud is finally buried. Better in its individual setpieces than as a unified whole, Trail of the Lonesome Pine is still a worthwhile experience, especially when a pristine three-strip Technicolor print is available.

Charles B. Middleton
as Blacksmith

Powell Clayton
as Dave at Age 5

Tuffy the Dog
View All

Critic Reviews for Trail of the Lonesome Pine

Aside from the colors of nature, and a couple of swell fistfights, it's nothing special.

Still, even if the humans in the picture didn't behave very sensibly, the technicians and photographers were at their best and have given us at last an outdoors film which doesn't look either like a series of postcards or like nature on a color jag.

An historical film. It's the first outdoor film to be shot in the three color Technical process.

[Not] worth fighting for above and beyond its unquestionable historic importance.

There are no featured reviews for Trail of the Lonesome Pine at this time.

Trail of the Lonesome Pine Quotes