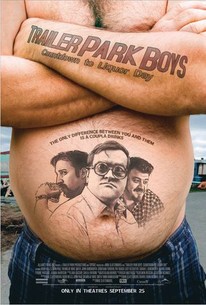 The television again proves to be too small to contain the big-time antics of Canadian cult favorites in this sequel to Trailer Park Boys: The Movie. That comedy left Ricky, Julian, and Bubbles facing two years of jail time, but they're now free to roam as they please -- as long as the parole board approves. Prison didn't reform their desire to make money using less-than-legal methods, but the trailer park supervisor, Jim Lahey, is determined to keep the boys honest despite their best efforts.

Jeanna Harrison
as Trinity
View All

Make no mistake, they're becoming Trailer Park Men, demonstrating sure signs of maturity

This feels a lot like a swan song, with everything wrapped up in a nice little package. Maybe that's for the best.

It could be the funniest Canadian movie ever made.

For this swan song, themes such as relationships and fate and inevitability are actually explored. Again, yes, in a Trailer Park Boys movie.

Great sequel to Trailer Park Boys: The Movie. Countdown To Liquor Day is a fine comedy that also signals the end of the popular TV show. The boys return in fine form, and their up to the usual easy money scams. Countdown To Liquor Day is an improved sequel to the original film, and in many ways a better one. The writers are more confident with the material this time around, and they were able to write a film that is much more entertaining, and funny than the first. I really enjoyed the first film, but I preferred this sequel because it was a lot funnier than the first, and like I said, it was a better written sequel. The usual things we expect from a TPB film are here and all the zany characters we love are also here. Ricky, Julian and Bubbles are all as funny as as ever. Countdown To Liquor is a much more accomplished and confident film, and it ends the series on a high note. I expected the film to be good, but not this good. This is a terrific comedy with plenty of laughs. Filmed in the mockumentary style of the show, Countdown explores new ideas that we never saw on the show.Which I think is one of the movies biggest strengths. Countdown To Liquor Day is a fine Swan Song to one of the best Canadian shows ever created. Those who love the Trailer Park Boys will definitely enjoy this hilarious sequel.

An improvement on the previous film, 'Countdown to Liquor Day' is not as funny as you'd expect it to be, but is still a satisfying conclusion to the series.