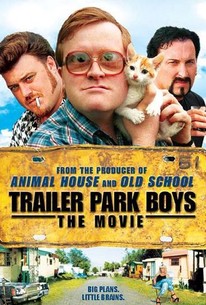 Critics Consensus: Trailer Park Boys suffers from its small-screen origins, and its tasteless humor is not for everyone, but it will satisfy fans of the genre.

Critics Consensus: Trailer Park Boys suffers from its small-screen origins, and its tasteless humor is not for everyone, but it will satisfy fans of the genre.

Critic Consensus: Trailer Park Boys suffers from its small-screen origins, and its tasteless humor is not for everyone, but it will satisfy fans of the genre.

Unlikely to reap success on these shores.

Co-writer/director Mike Clattenburg is right on target with his trio of inept trailer-park criminals.

Boys functions swimmingly as both a bigscreen inflation of smallscreen icons and a fairly hilarious stand-alone.

Canada may have a better health care system than ours, but the popularity of the TV show Trailer Park Boys proves that when it comes to low-brow entertainment, they can go lower than Jerry Springer.

Trailer Park Boys: The Movie is like a feature-length version of the television sitcom My Name Is Earl, only Canadian -- and not funny.

Unfortunately even the most loveable rogues can outstay their welcome; this is a television idea that doesn't go the distance.

The film retains the TV program's balance between its natural warmth and a wonderfully crass sense of fun.

You can understand why this television series struck such a chord with Canadian audiences and why the film shot to number one in that country.

The three central characters are an acquired taste, probably by the same fanclub that digs loser/doper comedies like Dumb and Dumber or the terrible Aussie equivalent, You and Your Stupid Mate

If the film's release brings more attention to this potential cult classic, then it's done its job.

If your idea of humor is spending time with creepy-looking lowlifes who don't have a brain among them, by all means check out Trailer Park Boys. The rest of you can save your money for better, smarter movies.

Ricky: You just gotta make sure the cops don't get your prescription, cause once they have your prescription, you're fucked!  "Big Plans. Little Brains." Trailer Park Boys: The Movie is a funny little movie about three dumb friends that live in a trailer park. If you've seen the show before then you know sort of what to expect. As far as a feature movie for them goes, this isn't too bad. It's funny, it's brisk, and it definitely keeps the social commentary flying throughout. It's not a masterpiece or anything too special, but it is solid, fun entertainment and I do have an appreciation for it. Three moronic friends living in trailer park get back together after two of them just get out of jail. Now they have some decisions to make. Ricky wants to pull the big dirty, which means going for one big payoff and then retire. Julian wants to take it a little easier and go for change. Literally, he wants to rob change from parking meters. When Julian goes to the movie theater and sees the biggest globe of change he's ever seen, he decides to do the big dirty, but still keep the change idea.  The comedy on display here is something you're either going to like right off the bat or you're going to hate. This comedy isn't the type that grows on you. You either like it or you don't. Not everyone finds "trailer park" humor funny. I for one do, but hey, opinions are like assholes, everyone has one.  It's rude, it's profane, it's obscene, it's hilarious. The great thing about the material at hands here is it can be ridiculous while keeping a sense of real life in it all. It's easy to believe there's people like these three friends out there in some trailer park, and I bet there's some people that are this bad of criminals out there too.

I love dis show. More people should see it, it's hilarious.

Stupid! The TV show can be quite funny, but the movie has failed. You can't take give a budget to a show that has absolutely no budget, it just doesn't work! Completely unfunny, but at least they tried to have a better story than the show!