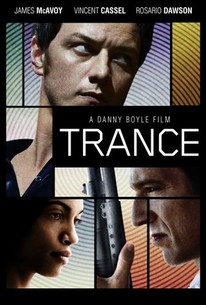 Critics Consensus: As stylish as ever, director Danny Boyle seems to be treading water with the surprisingly thinly written Trance -- but for fans of Boyle's work, it should still prove a trippily entertaining distraction.

Critics Consensus: As stylish as ever, director Danny Boyle seems to be treading water with the surprisingly thinly written Trance -- but for fans of Boyle's work, it should still prove a trippily entertaining distraction.

Critic Consensus: As stylish as ever, director Danny Boyle seems to be treading water with the surprisingly thinly written Trance -- but for fans of Boyle's work, it should still prove a trippily entertaining distraction.

Simon (James McAvoy), a fine art auctioneer, teams up with a criminal gang to steal a Goya painting worth millions of dollars, but after suffering a blow to the head during the heist he awakens to discover he has no memory of where he hid the painting. When physical threats and torture fail to produce answers, the gang's leader Frank (Vincent Cassel) hires hypnotherapist Elizabeth Lamb (Rosario Dawson) to delve into the darkest recesses of Simon's psyche. As Elizabeth begins to unravel Simon's broken subconscious, the lines between truth, suggestion, and deceit begin to blur. (c)Fox Searchlight

In the end, it's the unnecessary tricksiness of the film that halts its flow. A crucial human component is missing.

It's not that I don't think Boyle knows, by the time things start to get really bananas in the second half, that his movie is silly. I'm jut not convinced that he ever decided how he felt about it.

Trance is high-order, film noir nonsense that takes Boyle back to the thrillers he made at the start of his career with John Hodge (he wrote Trance, too), like Shallow Grave and Trainspotting, that were preoccupied with the grimy corners of the psyche.

The muddled mental states of the characters (and that of the audience) are mirrored by the film's visual style, which oscillates between languorous dreamscapes and frenetic action sequences.

Trance is to Danny Boyle more or less as Side Effects was to Steven Soderbergh: an arty spin on a trashy B-movie, engineered to showcase the director's particular gifts.

One of my least favorite of Boyle's films.

"Trance" is glossy, slick, and, especially early on in the film, the trippy madness is a lot of fun. Though with all bells and whistles and brightly colored shiny things, it's never as shocking or complex as it aims to be.

...although TRANCE is engaging and evokes Boyle's finest work, the chronic lack of empathy and extremely neat framing of the plot 'twists' mean that, in the long run, it will be no more than a footnote in his career.

[A] stunning film and another [Danny] Boyle triumph that simply must be seen.

McEvoy plays the anti-hero at the heart of the movie's existential riddle. And he does the job. But thanks to Cassel and Dawson, Trance is also pretty damn sexy.

While there's a certain amount of suspense undeniably well executed as we're left to decipher what's really happening and whose hypnonightmare we could very well be trapped in, this dread gets weighted down with asinine character motivations.

Danny Boyle's Trance is one of those films that boasts an impressive concept, but fails to deliver. I really expected this film to be good, but the end result is a mediocre film that just doesn't have what it takes to be an entertaining action thriller. The film has an impressive cast, an original concept, but one that I felt was underdeveloped and one that ultimately left a lot to be desired. I really wanted to get into this film, as I think that Danny Boyle is a terrific director, and he is among my favorites. However here he presents a film that is disappointing despite its premise, and you wonder how something interesting could fall flat. I expected much more from this film, and if you're looking for a thrilling film, you'll be disappointed with Trance. The film is all style and no real sense of substance. Trance ends up being a dull film, one that should have been great. Instead, it squanders its potential, and tries to overwhelm you into its spider web of so called thrills. I simply felt that the film didn't work, and it could have been better considering the talent involved in front and behind the camera. This is a film that tries too hard at capturing your attention, and in doing so, you're lost in its complexities, and it is a film that is hard to follow and not as interesting as it tries to be. Trance could have been a highly memorable film, but it ends up being disappointing and I feel that there is something missing here to make it a better film.

Entertaining British crime caper but I found the characterisations a bit hard to believe and the plot becomes a bit too confused.

Trance sees director Danny Boyle return to the kind of kinetic sensory-overload-with-attitude that harkens back to his early days of Trainspotting glory. And while the images are undeniably beautiful, and the three main cast members are all excellent, nothing can save a story that veers quickly and remorselessly into nonsense territory. In fact, what's frustrating about the movie is that it uses its buckets of disorienting style in an attempt to distract audiences from a storyline that progressively gives up every thread of logic, as it transforms from an enjoyable heist movie with a psychological twist in to a melodramatic Inception-esque romance/thriller with a bonkers action-movie finale, all of which comes off as tonally confused as it sounds. Beautiful, yes, but in the end, no amount of captivating visuals are enough to lull the audience into forgetting the movie's many flaws. It's basically The Beach all over again.

After a string of mainstream hits (Slumdog Millionaire, 127 Hours), "Trance" is Danny Boyle's return to the more eccentric genre fare he was known for, and he really directs the hell out of what is one of the best entertainments of the year. In Boyle tradition, It's a fantastic piece of visual filmmaking... but the cast is great, the soundtrack is kinetic, and the energy of the film is absolutely infectious as well. In the end I STILL can't grasp all of the plot's intricacies and I'm left a bit dizzy, but that's just par for the course in a movie aptly named "Trance." Trying to put it all together is so much fun that it hardly even matters.