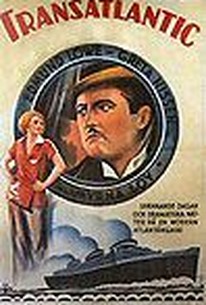 Adhering to a formula that would later be popularized further in Grand Hotel, Transatlantic is one of the best of the "multi-story" films of the early 1930s. As a luxurious ocean liner makes its way across the Atlantic Ocean, the audience is made privy to the travails of several of its passengers. Edmund Lowe heads the cast as Monty Greer, a suave gambler who falls in love with Judy (Lois Moran), the daughter of immigrant lens grinder Rudolph Kramer (Jean Hersholt). In trying to recover some valuable securities stolen from banker Henry Graham (John Halliday), Greer finds himself in the middle of a fierce gun battle in the ship's engine room. Meanwhile, Graham, who has been cheating on his wife Kay (Myrna Loy) with sexy dancer Sigrid Carline (Greta Nissen), is murdered by person or persons unknown. And that's only three of the plot strands in this marvelously complex shipboard thriller. In almost constant reissue well into the 1940s, Transatlantic was also very nearly transformed into a TV series in the late 1950s; though this project never flew, vestiges of the original can be detected in the popular all-star TV weekly of the 1970s, The Love Boat. Of special interest is the Oscar-winning art direction by Gordon Wiles and the cinematography of James Wong Howe, both of whom employ techniques that anticipated Orson Welles' Citizen Kane by ten years.

There are no critic reviews yet for Transatlantic. Keep checking Rotten Tomatoes for updates!

Early talkie precursor to Grand Hotel with some great set design but too episodic and several overripe performances. Worth it for an early glimpse of Myrna Loy, very beautiful, but don't go out of your way.