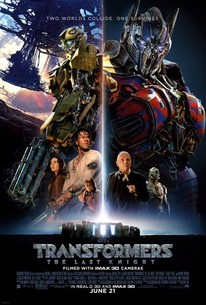 Critics Consensus: Cacophonous, thinly plotted, and boasting state-of-the-art special effects, The Last Knight is pretty much what you'd expect from the fifth installment of the Transformers franchise.

Critics Consensus: Cacophonous, thinly plotted, and boasting state-of-the-art special effects, The Last Knight is pretty much what you'd expect from the fifth installment of the Transformers franchise.

Critic Consensus: Cacophonous, thinly plotted, and boasting state-of-the-art special effects, The Last Knight is pretty much what you'd expect from the fifth installment of the Transformers franchise.

The Transformers leap into action once more in this sequel from Paramount Pictures and director Michael Bay. ~ Jason Buchanan, Rovi

An exhausting distillation of everything that can possibly go wrong with a blockbuster.

Transformers: The Last Knight is the pinnacle of summer blockbuster stupidity. The only thing that could top it is another Transformers sequel, a nightmare to imagine.

The end of the world can't come soon enough in Transformers: The Last Knight.

Though convoluted and mostly indistinguishable from piffle, it's by no means the worst of the bunch.

Regardless of our opinions, we all know what a Michael Bay film is. This one's his most Baysome.

One scene features a pair of bickering Transformers voiced by John Goodman and Steve Buscemi. With John Turturro also appearing in the film, it's safe to say THIS is the reunion movie that The Big Lebowski devotees were eagerly awaiting.

Shall I start with expressing how, in all my years, I've never been so tempted to leave a movie theater?

It's heavy metal filmmaking, loud and proud, like a drum solo that goes on for just a hair too long.

From the opening seconds, there's a perpetual introduction of new characters - for which too little time is given to properly introduce them.

the cinematic equivalent of a crowd chanting U-S-A, U-S-A! But with robots.

If there's such a thing as a lesser Transformers movie, The Last Knight is probably that. What's missing isn't energy or adrenaline; it's enthusiasm and creativity.

The Transformers franchise has had its ups and downs. How far up and how far down is up to you, because I think this is one of the most divisive franchises out there today. Look, I enjoyed the original live-action film quite a bit. The second isn't good, the third one was a little better, but ever since the original cast left, this franchise has been digging itself an even deeper hole. I didn't have any hopes going into this film, other than the fact that I was hoping for it to be the best one in the franchise. I don't hope to dislike a film and for the most part, I find almost all of these movies tolerable, but Transformers: The Last Knight isn't only the worst film in the franchise, it's one of the worst films I've seen in a very, very long time. I have very few positives to say about this movie, so this may seem like more of a rant, but let's dive right in. With a story crafted by four writers, there will always be conflict as to what fits into a film. Personally, I believe that a film should have no more than two writers, due to the fact that the term "too many cooks in the kitchen" is referenced far too often. The premise of this film is all over the place. The opening to this movie tells the audience that the Transformers have been here since the ancient times, which makes no sense in continuity with the first film, but that's another story. Optimus has his own story on his planet, which the film hardly ever focusses on, and characters/locations from previous films are shown/referenced to show that you're still watching the same franchise. With the addition of Anthony Hopkins unravelling the history of the Transformers, this film just becomes a giant bore, making you wish for an awesome climax, which also never happens. The conclusion to the previous film had Optimus leaving Earth in search of his creator. This small aspect of the last instalment is the only thing that gave any kind of promise to this one being interesting. That being said, they pretty much abandon that for the majority of the movie, rarely ever showing what Optimus is up to until the third act. Sure, sometimes saving the best for last works, but when the most interesting thing happening in the movie forces you to wait and then lets you down in the third act, what was the point of the movie anyways? I can't stress enough how disappointing and hilariously executed the plot twists are throughout this film. Without spoiling anything, the big plot twist that reveals who the last remaining knight is, is the most I've chuckled at a movie in a while. The film asks you to suspend your disbelief, even for the standards of a Transformers movie, and it was at that point that I lost complete interest, which is really saying something, because it was the most interesting aspect about the movie that ends up ruining the movie. We all know if this film makes a lot of money (which it probably will) we're going to see more movies, but in terms of quality, Transformers: The Last Knight is the final nail in the coffin for me. It's one thing when a movie fails to deliver on the one thing that the previous instalment promised, but another thing entirely when the film at hand seems to be adding addition sub plots in order to pad out the run time. From bad humour (again), to cool action that you need to wait two hours to see (again), to the build up of Optimus being the villain, only to completely thrown that away for a twist that is meant to be taken seriously, but ends up being hilarious, this movie is the definitive death of the franchise that has already been dead in the water many times. Look, I'm sure some people may find enjoyment out of this movie, but I would have to ask why that is. From horrible dialogue, to an insanely convoluted premise, to the best characters hardly ever being present, to a climax that is too ridiculous to take seriously, Transformers: The Last Knight is officially the first Transformers movie that I absolutely hate. So take this as an even bigger warning, because when people were tearing apart the second and third instalments of this franchise, I was one of the first to defend them for being dumb fun popcorn flicks, and as bad as Transformers: Age of Extinction was, at least it felt like a continuation of the franchise. With everything this movie tries to accomplish, it also makes itself the most distant from the series. Aside from maybe one or two chuckles and a couple of cool battle sequences, Transformers: The Last Knight is the worst film I've seen in all of 2017. It's easily the worst in the franchise and I can't stress enough to not spend your money on this movie. This film is so drawn out that I fear even kids will be bored out of their mind. Most films don't need reboots, but if they want to make more Transformers movies, please start from scratch, because there is no coming back from this atrocity.

Poorly-stretched plot, bland characters, hot-garbage action and senseless direction: everything you'd expect from a Transformers film. The Last Knight brings the 'Bayhem' to an excruciating (and final) peak and lands it as the worst of the franchise. 1/5