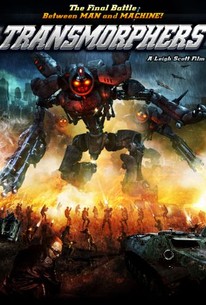 One of the last remaining human rebellions left on Earth makes their final move against a deadly robot force in the sci-fi action flick Transmorphers. Asylum Entertainment, the same company behind such other direct-to-DVD rip-offs as Snakes on a Train and The Da Vinci Treasure, brings home to audiences the ultimate fight between man and machine that their $1.98 budget can afford. Three hundred years after a race of transmorphing alien robots took over the planet Earth and decimated it, a team of rebels cryogenically unfreezes a hero in hopes of giving them the edge in the fight for all humanity

Erin Sullivan
as Suzy
View All

Worth your time. And no, Asylum didn't pay me to say that...

Even the most dedicated Bad Movie fans will have difficulty slogging through this one.

"Transformers" was always going to be a big movie in terms of commercial sucess due to the popularity of the toys, and you can trust the studio that made this; "The Asylum" will do everything they can to cash in on it. They suceeded as people are actually buying this ridiculously silly movie. Count on them to use hindsight to see how sucessful there film is in terms of money but not genuinely good film making. But Transmorphers was different to their other films like "Monster" (Cloverfield rip off) and "Snakes on a Train" (Snakes on a Plane rip off). The Asylum actually try to make a good movie in this case, of course they do not succeed this is not a good movie. Its not entirely bad either because their is more character development then these other Asylum examples, you'll find you care what happens to these people. Nevertheless Transmorphers's effects are good awful. Some of the worst CGI usage i've ever seen in my life. Its even Worse than the most terrible graphics you'd see on an old used video game. My verdict is that although The Asylum tries to please its audience this time round by actually trying to make something the audience would be expecting, like its inspirational "Transformers". The film makers malfunction intensely.

Asylum productions should be spanked. They had a lot of nerve to try and cash in on the Transformers craze. Watch yourself before you spend any cash on this turkey. You do not get to see any considerable robot action or effects in this lame-o-rama Transformers look-alike on front cover only.

Horrible special effects, hybrid sci-fi plot [cross between Transformers, The Matrix, and Terminator]. Actually good in some ways. With a bigger budget and some cast substitutions it could have been a great sci-fi film.

The Asylum may continue to produce cheap knock offs but who cares? They're not hurting anybody and they're a nice easy watch on TV. Transmorphers may have wooden acting, CGI that would look poor in an insurance company advert and a lead who sounds like Sean Bean but there's also some fun here. First of all you can play "Spot the twist" some are easy and some are easier but time yourself and your friends to see how long into the film you can work them out. Second we have a married lesbian couple, which the film never makes a big deal out of. You wouldn't get that in Hollywood. It's just a natural relationship. How nice. Third we have a storyline that may rip points from every sci-fi film under the sun but it does make more sense than Transformers. It's moderately enjoyable, especially for fans of The Asylum such as myself.