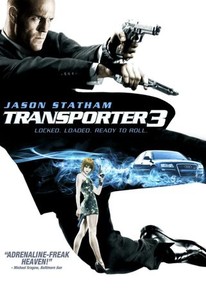 Critics Consensus: This middling installment in the Transporter franchise is a few steps down from its predecessors, featuring generic stunts and a lack of energy.

Critics Consensus: This middling installment in the Transporter franchise is a few steps down from its predecessors, featuring generic stunts and a lack of energy.

Critic Consensus: This middling installment in the Transporter franchise is a few steps down from its predecessors, featuring generic stunts and a lack of energy.

Strong-armed into transporting the kidnapped daughter of the head of the Environmental Agency for the Ukraine from Marseilles to Odessa, skilled wheelman Frank Martin (Jason Statham) enlists the aid of Inspector Tarconi (François Berléand) in accomplishing the treacherous assignment in this action-packed installment of the popular action series produced by Luc Besson (who also co-scripts). Frank isn't exactly thrilled with his latest assignment, but when his employer turns up the pressure, he has little choice but to deliver. His cargo is a feisty young girl named Valentina (Natalya Rudakova) -- who just happens to be the daughter of Leonid Vasilev (Jeroen Krabbé), the powerful top dog of the Ukraine EPA. Now, as Frank makes his way through Stuttgart and Budapest on the road to the Black Sea, Vasilev's men besiege his car from all sides, and his cynical young passenger gets a bad case of Stockholm Syndrome. As the driver and his cargo grow increasingly close, they both realize that making even a single mistake could cost them dearly. ~ Jason Buchanan, Rovi

David Kammenos
as driver in market

Igor Koumpan
as Cop in Ukraine
View All

Delivers what it promises.

Though director Olivier Megaton exhibits a good bit of that annoyingly jagged editing that's become all the rage in action films, he has the good sense to never cut away from Statham's pecs.

Incoherent and inconsistent, this is a step back for Statham in his quest to become more than a cult figure.

The flashy editing gets on one's wick and no one's going to win an Oscar - but, really, who's complaining? This is straight-up fisticuff fun.

Transporter 3 is a reassuringly beefy thriller in which Jason Statham has to drive very fast across Eastern Europe with a Ukranian beauty queen on the seat beside him. No one, including Jason, has the slightest clue why. Never mind.

Statham is a relatively entertaining action hero - though he is better in the Crank films. The script is by Besson, but the director is Olivier Megaton, whose surname is the most exciting thing about the film.

The car chases are exciting, the fight scenes hugely entertaining... and [Jason] Statham even handles Frank's emotional side with a sharp-edged style.

...fares far better as "Jason Statham's series finale" than it did as "another sequel not as good as the last one."

For fans of Jason Statham and classic carsploitation action films.

Usually stuff like this gets mercifully relegated to the 2 A.M. slot on HBO next to most recent Steven Seagal masterpiece. But The Transporter series has managed to gather enough of an audience for Lionsgate to inflict it on us every so often.

I didn't expect much at all, except some good fight scenes, a loose plot and action. It delivered. If you have seen the first two films, you know what to expect. It's more of the same.

It's definitely my favorite entry in the series, managing to be the most serious and realistic in terms of storyline and action. Jason Statham proves himself to be the most powerful man to ever drive a car professionally, taking down anything in his warpath. I loved the addition of Natalya Rudakova, making for Frank's best love interest. Robert Knepper is also the best villain in the series, even though he doesn't do much physically he happens to be the most intimidating. It's a rare event in which the trilogy ends on a high note, this certainly does.

not a bad movie but not a good one. it's got a simple plot and not much of a story but a lot of action. it's entertaining but it doesn't work nearly as well compared to the crank series which is far better. C+

Third entry in this crap series of films. This by far the worst one in the series. So bad that I had to turn it off after 30 minutes. The actress that stathams with is very annoying and untalented, which made me shut this film off. Looking back, I can look at The Transporter series as a terrible action franchise. These films lack effective story, and they just attack the viewer with quick action scenes that confuses you and doesn't do anything very creative. This third entry in this lame series lacks, any wit or real drama that has made action films such as The Dark Knight great films. I love over the top action films, but The Transporter films are just a massive fail because it lacks anything very creative. If they make a fourth film, I'm definitely going to skip it.