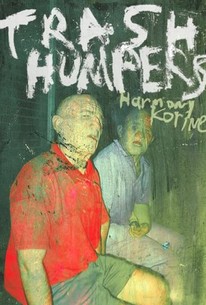 A Dadaist delight, Harmony Korine's Trash Humpers is a direct descendant of Jack Smith's Flaming Creatures, perhaps the first and only.

Trash Humpers, far being an authentic expression of the American Id, is a nostalgic lament for an era in which Korine's films could be held up, rightly or wrongly, as transgressive. No longer.

It is an exercise in experimental provocation and in pure insolence, while sometimes being horribly funny and fascinating, reviving the spirit of Tod Browning's Freaks and the ice-cold vision of Diane Arbus.

It's a typical Korine move: gesture towards seriousness, and then undercut it in the name of puerility. Or is it post-political cynicism?

This is counter-cinema at its best. For every insipid, corporate-led blockbuster that comes hurtling out of Hollywood, something as gross, coarse and provocative as Trash Humpers must counteract, if just to remind us of the power of film.

Imagine if you salvaged a grubby VHS tape off the roadside only to discover it contained outtakes from an amateur Jackass knock-off.

This is a monster movie, but instead of creating fictional characters, it simply holds a mirror up to America.

They're celebrating. What are they celebrating? The mere fact of being alive... weirdly festive and triumphant,... Something deeper, darker, accrues from the post-adolescent prankishness. If we survive, we all grow elderly, lunatic and happy-go-lucky.

Congratulations Harmony, you've just made the weirdest movie ever.

The most shocking thing about Trash Humpers is that it's boring...at times, hellishly annoying, but virtually never offensive.

In one scene of "Trash Humpers," the camera lingers on an abandoned toilet in the middle of a field, as voices cackle off-camera. The filmography of Harmony Korine, ladies and gentlemen!

Viewers unfamiliar with Korine's alternative style of filmmaking may walk out in disgust. But if you're willing to broaden your cinematic expectations to include the utterly random, it's a must-see.

Korine believes to be making something provocative and artsy by refusing anything similar to a plot and shooting endless unrelated scenes of abhorrent scum in VHS, but all he does is bore us to death with an interminable, painfully unwatchable load of crap. (Zero stars)

A gang of rednecks in wrinkled masks that make them look like escapees from a nursing home for the criminally insane engage in random acts of vandalism in empty suburbs. A dull, pretentious slog through the rubbish: your bourgeois sensibilities may or may not be offended, but they'll almost certainly be bored.

Harmony Korine is not backing down. Just when you thought he'd start toning it down to curry favor with American critics, Korine brings us "Trash Humpers," his most radical project yet. "Trash Humpers" is a failure, but it's the most interesting failure since Richard Kelly's "Southland Tales" (2007). In these profoundly unoriginal times, it's heady tonic to encounter Korine's creativity. How many American filmmakers today can you say are one of a kind, completely unlike anything that has come before? The best parts of "Trash Humpers" are the first half-hour and last 10 minutes. In between is some of the most random, shallow, repetitious, infantile, unwatchably bad cinema you'll ever see. However, I appreciate Korine's courage in including footage like this. American culture desperately needs more filmmakers willing to take huge risks. It behooves everyone who cares about American culture to see "Trash Humpers" in a theater or rent it on DVD. We need to send a message with our dollars that we value brave, extreme art even when it is not a complete success. "Trash Humpers" could be interpreted in a million different ways, as of course is the case with all avant-garde art. I saw the most interesting parts of the film as a cross between horror and parody, with Korine depicting humanity (or at least a subset of humanity) as a worm-like or vermin-like species traveling in packs and randomly vandalizing and humping everything around them. A recurring image has a pack of these creatures humping large plastic trash cans. This was such an important part of Korine's vision that he made it the title of the project. I actually found the vandalism sequences much more engaging and disturbing than the copulation with trashcans, which gradually became more silly and repetitious than anything else. Most interesting of all was that Korine fitted the four main actors (one of whom was Korine himself, it appears) with gruesome masks, making them appear like a different species. He also develops a new approach to cinematography such that everything was blurry. This enhanced the feeling that this subhuman race was so disgusting that it was difficult to look at them. The camera itself seemed to be squinting, both drawn to and repelled by what it captured. I couldn't quite make out what Korine did to get this effect. At times it appeared that he had first shot on a cheap videocamera and played the footage back on a cheap TV. Then he set up another videocamera to film the images flickering on the TV monitor. Footage of footage. I found this experimentation with form for the most part creative, innovative, and conducive to further reflection on the film's repulsive and strange content. At times, however, Korine self-consciously made it seem like we were watching a very old VHS tape, complete with some passages that appeared to be going in rewind. I didn't find this homage to VHS either innovative or interesting. I am surprised that Korine would stoop so low as to traffic in nostalgia. But mercifully these faux-rewinding sequences were few and far between. Other radical aspects of the film/video include a complete break with narrative and a near-complete break with dialogue. What we get is a series of vignettes strung together in pretty much random order, with little to no dialogue in each. Korine is conveying an overall impression rather than telling a story. Surprisingly, when dialogue was used, the film was at its weakest. I wish Korine had remained wordless throughout. The horror aspects, at least, would have been conveyed more effectively without dialogue. --unfinished--